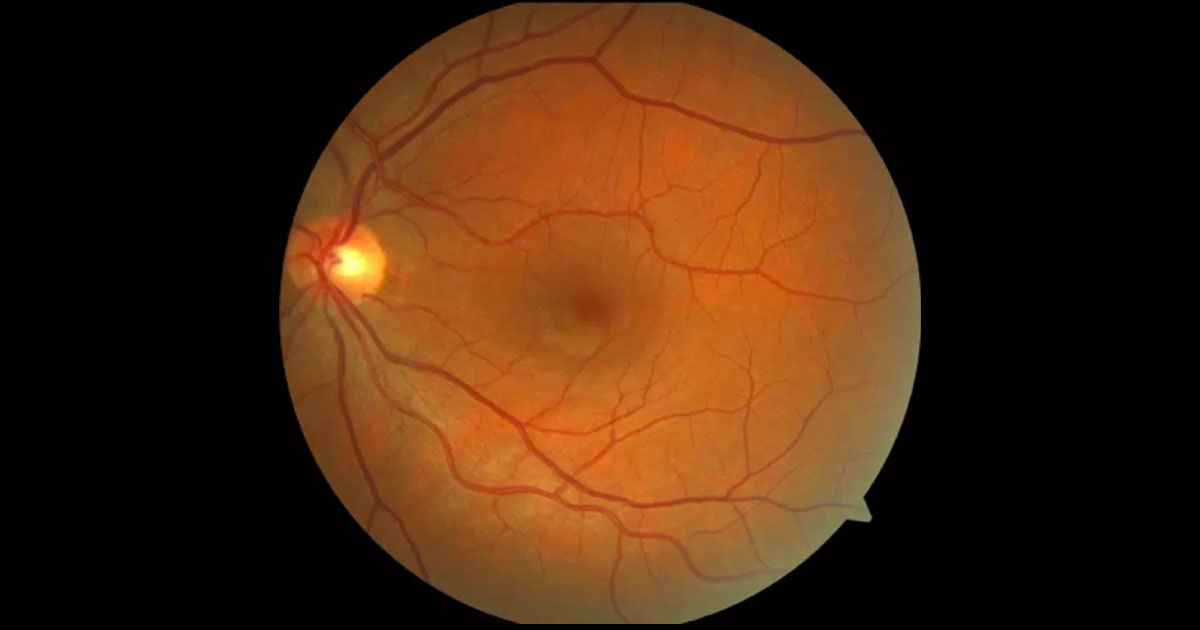 Figure 1. A small white lesion is visible just inferior to the left fovea.

A 42-year-old female presented with a 2-week history of a “blurry spot” in her left vision.

A 42-year-old female presented with a 2-week history of a small “blurry spot” just above fixation in her left eye. There was no associated photopsiae or floaters, and her right eye was unaffected. There was no pain on eye movements and no other neurological symptoms such as headache or limb pareathesiae. She had suffered from migraines associated with her menstrual cycle but had no other medical conditions. Her only regular medication was Trifeme (levonorgestrel and ethinylestradiol), oral contraceptive pill taken for hormonal regulation for per vaginal bleeding. She did not smoke.

Visual acuities were 6/5 bilaterally with spectacles. Intraocular pressures were 15mmHg in both eyes. Amsler Grid testing revealed a small scotoma just above fixation. Pupillary reflexes, colour vision and red saturation were all normal. Anterior segment examination was normal with no signs of intraocular inflammation. Dilated fundoscopy of the left eye showed a white lesion inferior to the fovea (Figure 1). The right macula and optic nerves were normal.

The differential diagnosis of this presentation includes:

Optical Coherence Tomography through the lesion in the left eye showed it to be a hyper-reflective band, located at the inner nuclear layer (INL, Figure 2). The other retinal layers and the left OCT were normal. Fundus autofluorescence (Figure 3), fluorescein angiography (Figure 4) and Humphrey Visual Field testing (Figure 5) were normal in both eyes. However, near-infrared reflectance demonstrated a dark, wedge-shaped lesion corresponding to the white lesion on clinical examination. 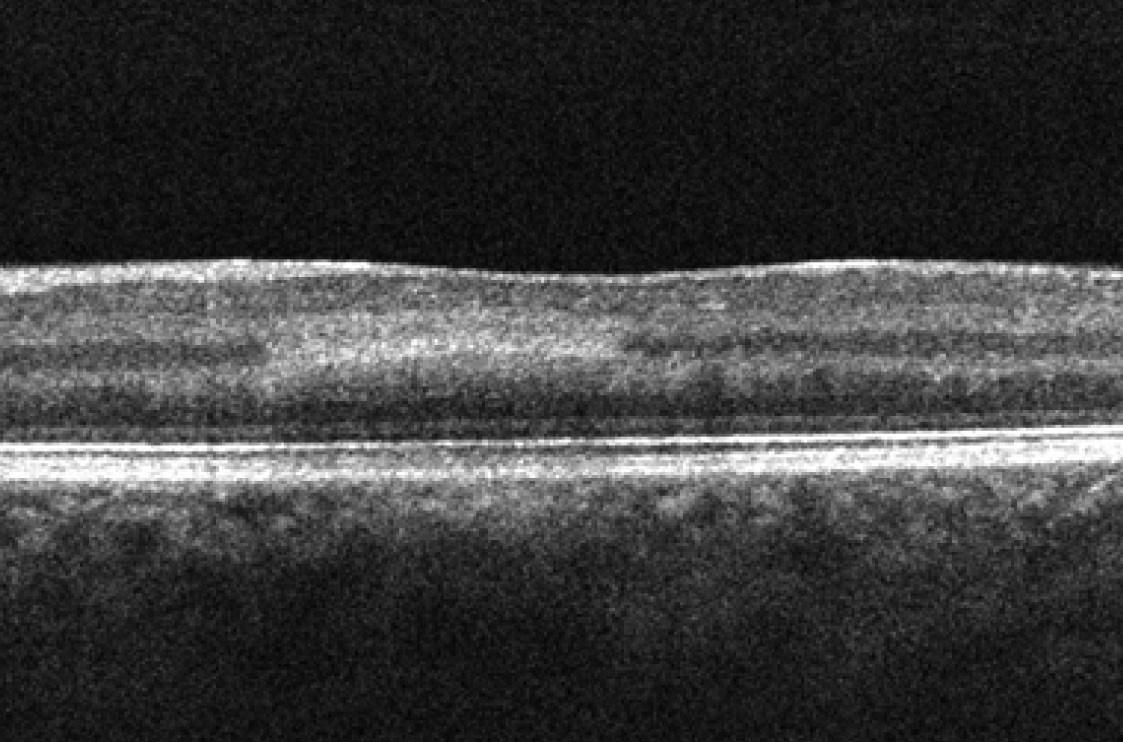 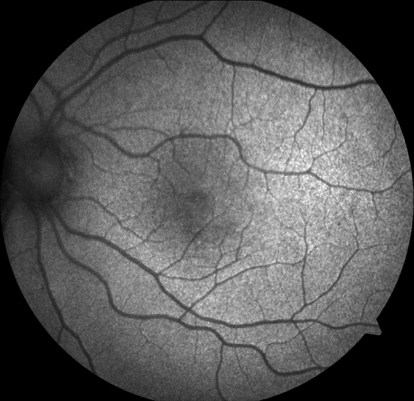 Figure 3. Fundus autofluorescence of the left eye is normal. 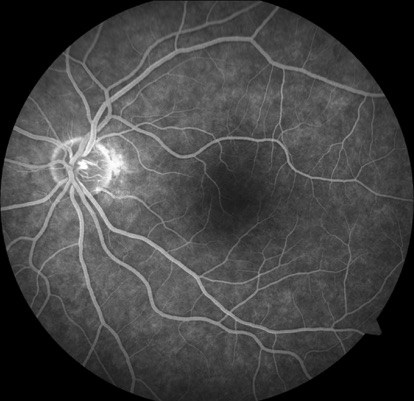 Figure 4. Fundus fluorescein angiography of the left eye is normal, with no evidence of vascular occlusion. 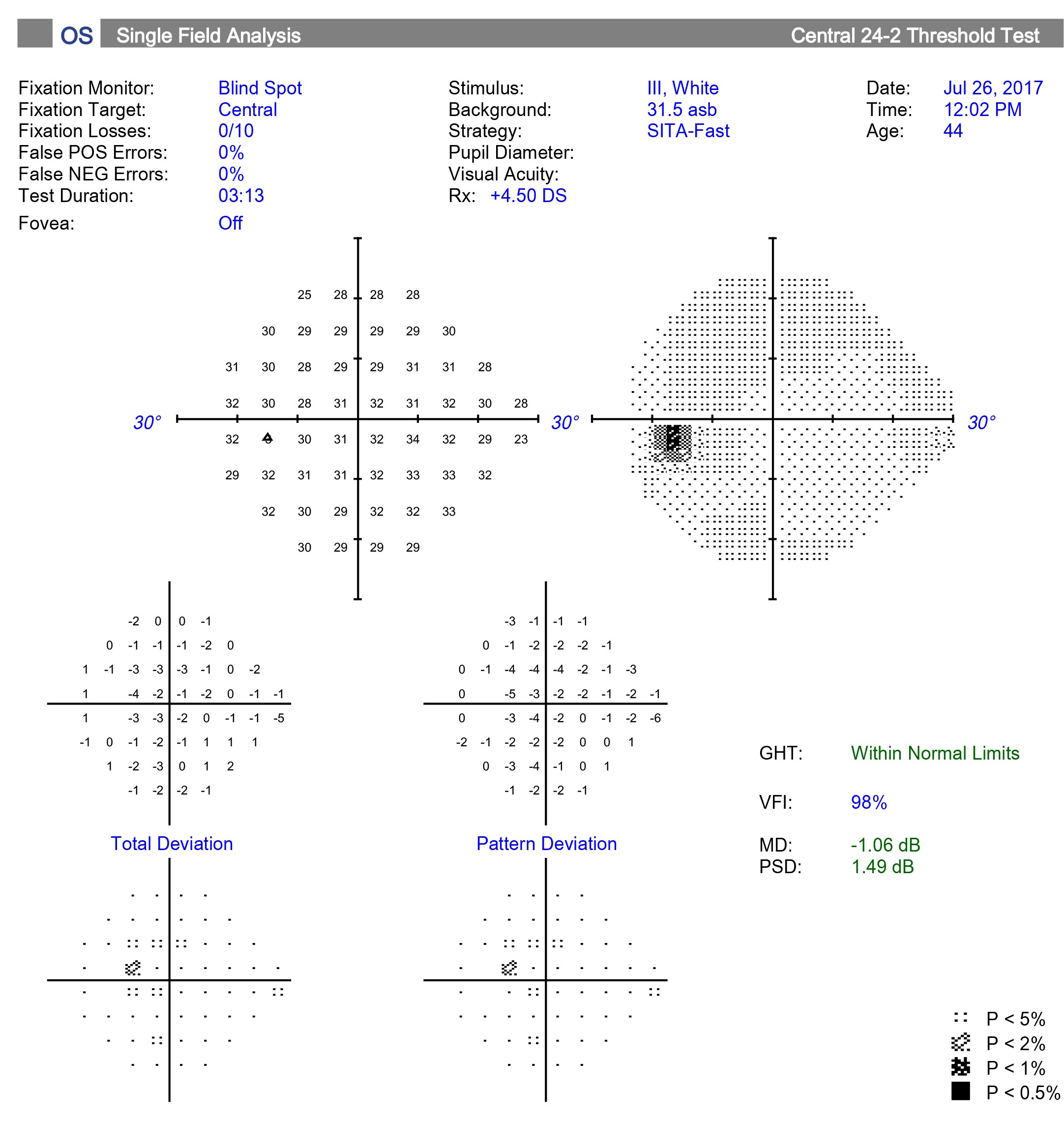 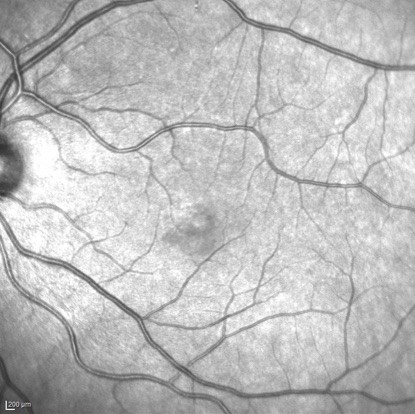 Figure 6. Near infra-red reflectance shows a dark, wedge-shaped lesion pointing towards the fovea, corresponding to the retinal lesion seen on fundus exam.

The location of the hyper-reflective plaque in the inner nuclear layer is consistent with Paracentral Acute Middle Maculopathy (PAMM).

As the underlying pathology in PAMM is believed to be ischaemic in nature, several blood tests were ordered to search for a possible cause. FBC, UEC, serum ACE, ANA, ENA, anti-dsDNA, ANCA, CRP, ESR and QF-gold were all normal. Chest x-ray was also normal. The most likely causative factor in this case was the oral contraceptive pill, which contains both a progesterone and oestrogen component. The oestrogen component has been associated with arterial and venous thrombosis. The Trifeme was ceased after consultation with the patient’s general practitioner, and the patient was switched to a progesterone only pill. Four weeks after initial presentation the fundus lesion was no longer apparent on clinical examination (Figure 7) and was less prominent on OCT scans (Figure 8). Visual acuities remained 6/5 in each eye. 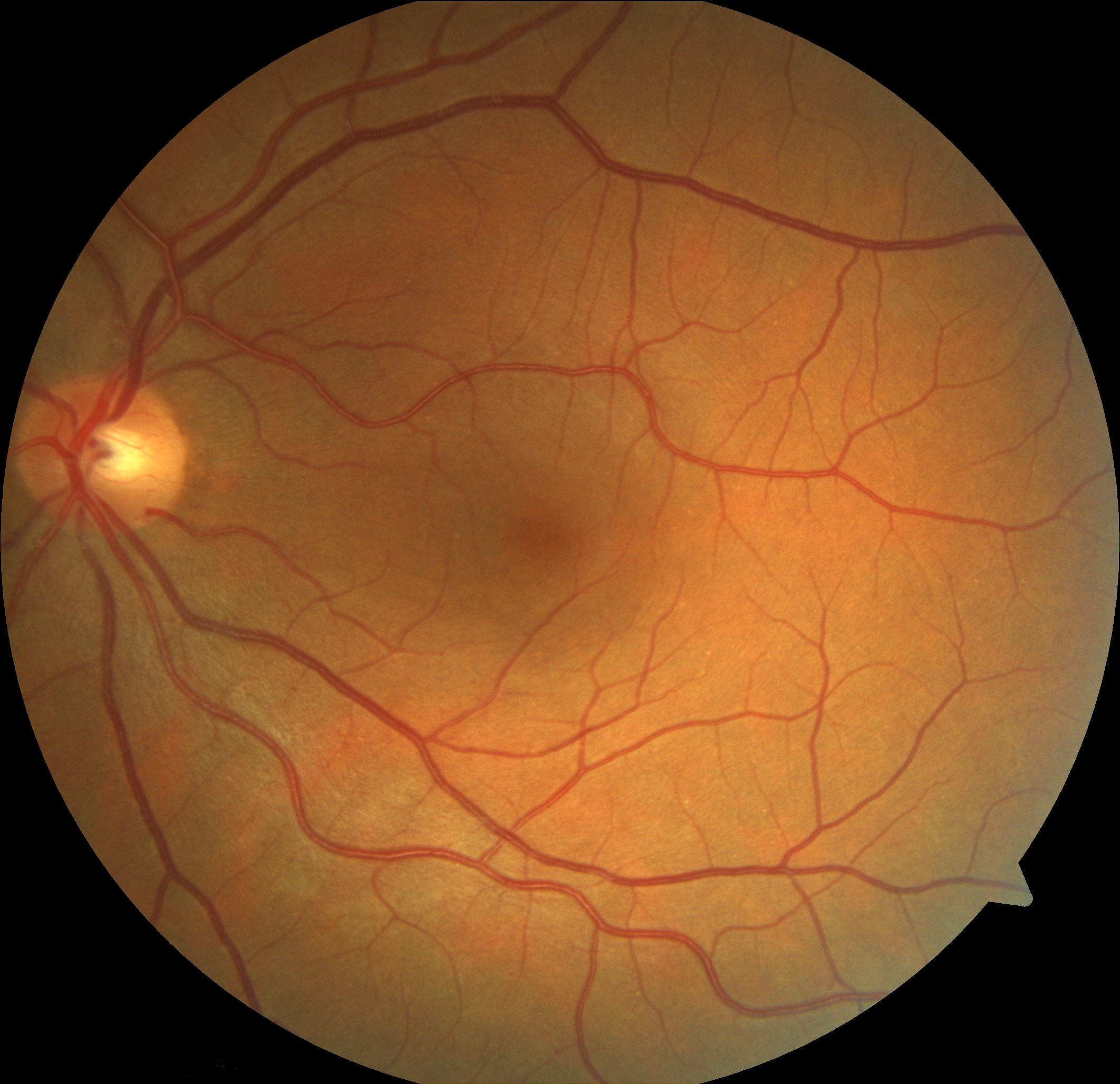 Figure 7. Fundoscopy shows resolution of the white macula lesion after one month. 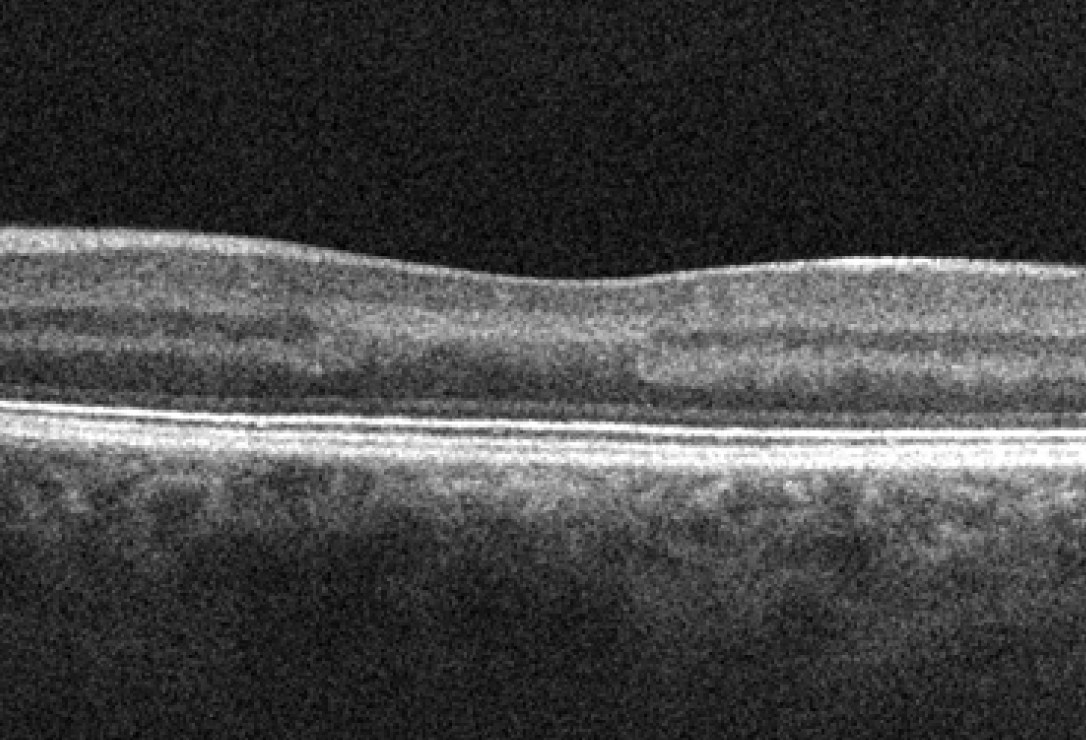 Figure 8. Optical coherence tomography in the left eye after one month shows reduced prominence of the hyper-reflective band.

Paracentral Acute Middle Maculopathy (PAMM) was first described in 2013 by Sarraf et. al.(1) The condition usually presents with the sudden onset of a unilateral paracentral scotoma. It may present in patients with known cardiovascular risk factors, or be idiopathic. Ischaemia of the intermediate and deep capillary plexuses in the retina is believed to the underlying aetiology. Like its similar but distinct entity, Acute Macular Neuroretinopathy (AMN), it can present in young, healthy females, but is more common in older males with vasculopathic risk factors.(4) Associations include hypertension, hyperlipidemia, flu-like illnesses, migraine, vaccination, occlusive retinal vasculitis, caffeine, blood loss, toxaemia of pregnancy, sickle-cell retinopathy, Purtscher’s retinopathy, orbital compression and cataract surgery.(1,2) In our patient the oral contraceptive pill or migraines may have contributed to the development of PAMM.

The OCT appearance is diagnostic of the condition, with a hyper-reflective lesion seen at the inner nuclear layer. In contrast AMN shows hyper-reflectivity in the outer nuclear layer and cotton wool spots show hyper-reflectivity in the nerve fibre layer. Fundus examination may be normal in some cases, and OCT and near infrared imaging are very helpful for diagnosis.(1) Near infrared imaging shows a characteristic dark grey paracentral lesion that points toward the fovea. Often the lesion is wedge or teardrop shaped. Fluorescein angiography does not show any larger vessel occlusion in either condition. OCT angiography has recently been used to study PAMM.

No treatment is available for this condition, but risk factors need to be asked for on history. With time the hyper-reflective band seen on OCT often resolves, but permanent thinning of the inner nuclear layer may result. The paracentral scotoma may fade but often persists with time.