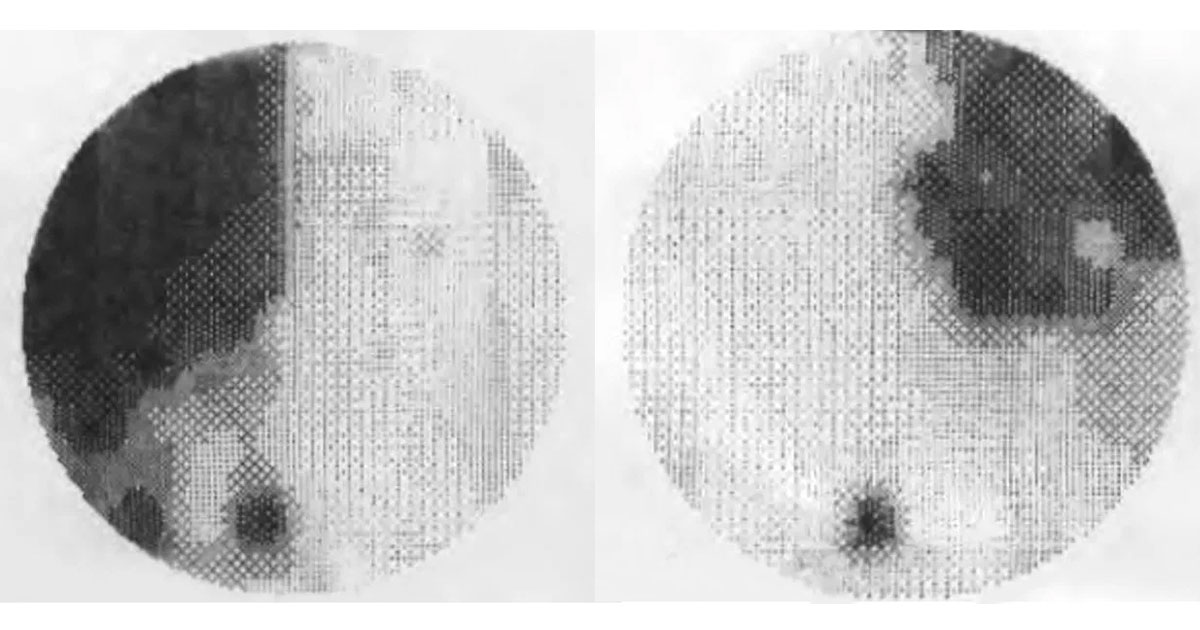 A 67-year-old female was referred with reduced vision.

A 67-year-old female was referred by her optometrist with a 12-month history of blurring of vision on the left side of her left eye. She reported occasional mild headache but no other systemic symptoms. Best corrected visual acuity was 6/6 in the right eye and 6/12 in the left eye. Intraocular pressures were 14mmHg in both eyes. Examination of the anterior and posterior segments was unremarkable. Formal visual field testing was performed (Figure 1).

The patient was otherwise well with no significant past history. The rest of the cranial nerve and neurological examination was normal. The patient was referred for an urgent MRI brain which showed a large sellar lesion causing marked displacement of the optic chiasm and extension into the left cavernous sinus.

The patient was referred for urgent neurosurgical intervention and had successful excision of the lesion via a transnasal (transsphenoidal) approach. Histopathological examination confirmed the diagnosis of non-functioning pituitary macroadenoma. Six weeks post-operatively, there was an improvement in her visual fields (Figure 2).

Pituitary adenomas account for 10-15% of all intracranial tumours.(1) The incidence increases with age, peaking between the third and sixth decades of life.(2) Symptoms result from the effect of growth and compression of surrounding structures, such as the optic chiasm, and/or from the hormonal effect of hyper or hypo secretion of pituitary hormones (Figure 3). The majority of lesions are benign, non-secreting space occupying tumours. Of lesions that secrete hormones, prolactin and growth hormone secreting tumours are most common.(2) Tumours exceeding 10mm in size are defined as macroadenomas, whilst those smaller than 10mm are termed microadenomas.

The classical presentation of larger tumours with bitemporal hemianopia reflects the chiasmal location of the compressive process (Figure 4), which is the site of decussating nerve fibres from the nasal half of each retina. Visual field loss usually starts in the supero-temporal quadrants and progresses inferiorly, as the decussating fibres from the inferonasal retinae are located inferiorly and therefore involved first by upward pituitary tumour growth from below the optic chiasm.

MRI brain is the imaging modality of choice as it provides better visualisation of soft tissue and vascular structures. Patients with a confirmed lesion should also have baseline testing of pituitary hormone function. Prolactin and some growth hormone secreting tumours can generally be managed with medication alone. Most other symptomatic lesions require surgical intervention. Where surgery is planned, the trans-sphenoidal approach is preferred (Figure 5), with only about 1% of cases requiring a transcranial approach.(3)

Radiation treatment is typically employed when the tumour is not amenable to surgical excision or if there is residual tumour after surgery. Risks include radiation induced optic neuropathy or radiation induced injury to any remaining pituitary tissue, with subsequent hypopituitarism. Overall prognosis is excellent, particularly for non-secreting microadenomas.(4) Secreting macroadenomas not amenable to complete surgical excision carry the worst prognosis. Of patients presenting with a visual field defect, the majority will experience some degree of improvement following treatment, typically in the first 3 to 6 months. Lifelong follow-up is required, however, as there is a risk of recurrence even decades after successful treatment.(4)