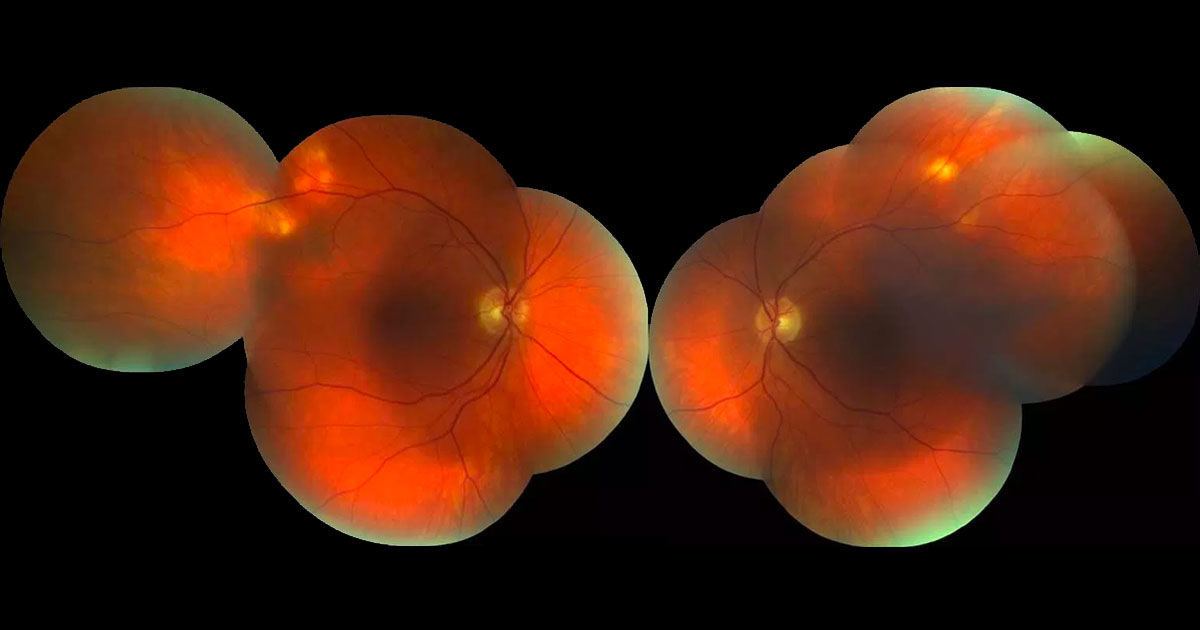 A 65-year-old Caucasian male was referred with unusual fundal lesions.

65-year-old Caucasian male was referred with unusual lesions in his fundi. He had seen his optometrist for a routine eye check and was asymptomatic. The patient was otherwise well and had no significant past ocular history.

Optical coherence tomography (OCT) through the nodules showed a craggy elevation of the sclera, with thinning of the underlying choroid (Figure 2). Red free photography highlighted the white lesions (Figure 3), which were slightly hyperautofluorescent (Figure 4).

Figure 2. Optical coherence tomography of the lesions shows an undulating elevation of the sclera with thinning of the overlying choroid. The retina is normal.

Figure 4. The nodules are mildly hyperautofluorescent.

The patient underwent blood testing for hypercalcemia, hyperparathyroidism and hypomagnesemia, which were all normal. Six month review was organised.

Sclerochoroidal calcification is an uncommon benign condition characterised by yellow-white subretinal masses that typically lie along the superotemporal vascular arcades in elderly Caucasian patients.(1) Histopathologically, the lesions represent deposition of calcium pyrophosphate in the sclera and/or choroid.(2) It is hypothesised that their superotemporal location may be related to the insertion of the superior oblique muscle.

Most cases of sclerochoroidal calcification are idiopathic, however occasionally there may be an underlying systemic cause such as hypercalcemia, hyperparathyroidism or hypomagnesemia. For this reason, baseline blood tests should be checked. The condition has been associated with renal tubular hypokalemic metabolic alkalosis syndromes including Bartter and Gitelman syndromes.(1) Imaging features have been described by Fung et. al.(3) These include fundus hyperautofluorescence and a “rocky” configuration on enhanced-depth imaging optical coherence tomography (EDI-OCT). The hyperautofluorescence may be either due to thinning of the overlying choroid, or intrinsic hyperautofluorescence of the calcific material. The findings of scleral thickening and choroidal thinning on OCT suggests that the entity has been misnamed, and should be more correctly termed “scleral calcification”. B-scan ultrasonography demonstrates shadowing of the lesion due to the calcification.

Figure 5. B-scan ultrasonography of sclero(choroidal) calcification shows marked shadowing of the lesion due to the calcium content (image taken from another patient).

Acknowledgements: We would like to thank Dr Jenny Ip for her contribution of this case.