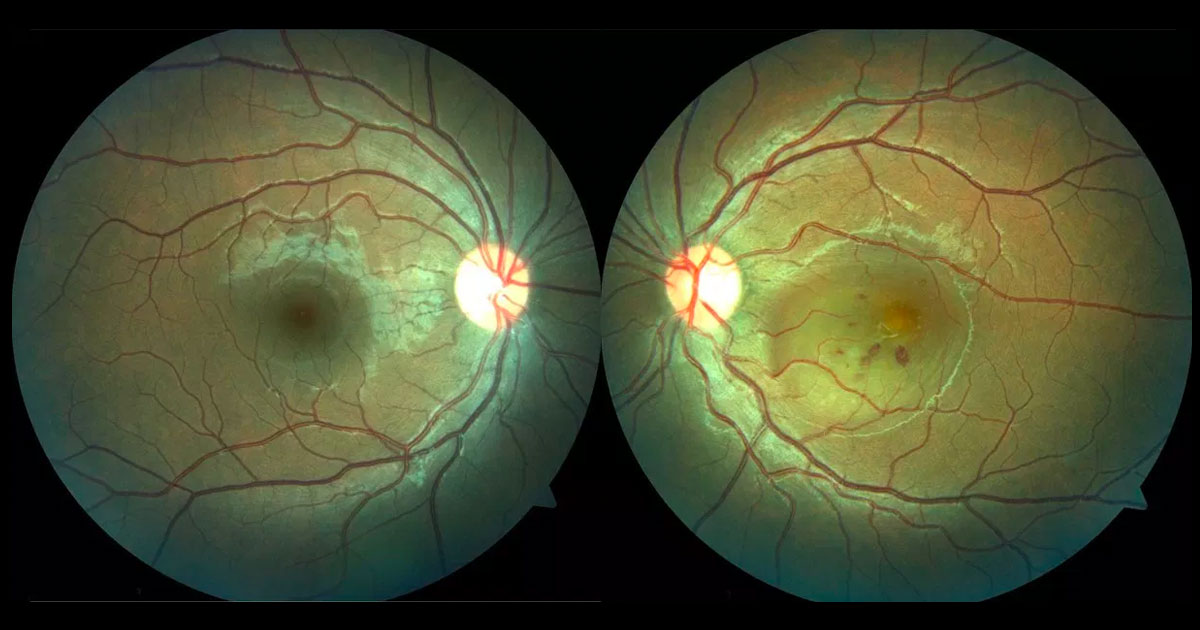 A 20-year-old man was referred with a central scotoma in his left eye.

A 22-year-old cook was referred by his optometrist complaining of a two-day history of worsening vision in his left eye. He had no previous ophthalmic history and had not seen an optometrist for many years. His past medical history included acne but he was not on any regular treatment. He was a “recreational” smoker. He had not used any corticosteroid medications. He denied any recreational drug use.

Visual acuity was 6/5 in the right eye (OD) and 6/18- in the left eye (OS). There was no relative afferent pupil defect (RAPD). Examination of the left fundus revealed a well demarcated circular area of elevated retina (serous retinal detachment) involving the macula (Figure 1). There were a number of small intraretinal haemorrhages within the area of elevated retina. There was no intraocular inflammation visible, with no cells in the vitreous or anterior chamber. The retinal vasculature was otherwise normal as was the peripheral retina. The right fundus was normal. Intraocular pressures were 14mmHg (OD) and 14 mmHg (OS).

The differential diagnosis for a serous retinal detachment of the macula with retinal haemorrhage includes:

Optical coherence tomography (OCT) through the left macula demonstrated subretinal fluid (Figure 2). Hyperreflective deposits were noted on the underside of the detached retina. The choroid was mildly thickened. There was no pigment epithelial detachment (PED) visible.

Fluorescein angiography demonstrated intense hyperfluorescence within the area of the serous retinal detachment (Figure 3). Blocked fluorescence was present in the location of the retinal haemorrhages. No abnormalities were noted outside the area of detached retina. No retinal vascular staining (as might be consistent with retinal vasculitis), or disc staining was seen.

On further questioning the patient reported a recent viral illness with fevers and a sore throat. He also reported painful papules on his hands and feet which had begun to desquamate at the time of presentation (Figure 4). These lesions were consistent with Hand, Foot and Mouth disease and subsequent serology was consistent with acute Coxsackie virus infection.

At review two weeks later, vision had returned to 6/9 in the left eye, although the patient still reported disturbance of central vision. Clinically the subretinal fluid had resolved (Figure 5).

At one year follow up. The visual acuity in the left eye was 6/6, although the patient still reported that central vision had not completely returned to premorbid baseline. Colour images and fundus autofluroescence demonstrated retinal pigment epithelial disturbance within the region of the prior serous retinal detachment (Figure 6).

Figure 5. Two weeks following presentation, the subretinal fluid had resolved spontaneously. Hyper-reflectivity was seen under the fovea at the level of the retinal pigment epithelium. There was interruption of the ellipsoid layer but preservation of the external limiting membrane.

Figure 6. At one year following presentation there is retinal pigment epithelial disturbance within the area of the previous serous retinal detachment (left). This corresponds with an area of fundus hypoautofluoresence (right).

Acute idiopathic maculopathy (AIM) is a rare condition that is characterised by acute severe vision loss often preceded by a flu-like illness. It was first described by Yannuzzi et al. who, in 1991, reported a series of 9 patients with preceding viral illness presenting with sudden severe unilateral vision loss associated with a serous macula detachment.(1)

Depending on the time of presentation following disease onset, patients will usually have a serous retinal detachment with an underlying greyish/yellow plaque at the level of the retinal pigment epithelium (RPE). Intraretinal haemorrhages, as in this case, are not uncommon and vitreous cells may be present as well as some disc swelling.(1-3) The lesion may appear similar to choroidal neovascularization. Fluorescein angiography demonstrates irregular early hyper- and hypofluorescence followed by late staining. Optical coherence tomography (OCT) demonstrates subretinal fluid and choroidal thickening.(2,3)

The symptoms usual develop after a viral prodrome of sore throat and fever and has been linked to Coxsackie virus infection(3,4). This was the case in this patient where he had signs of Hand, Foot and Mouth disease and Coxsackie viral tires consistent with acute infection. Whether AIM is due to direct viral infection, or an immune related phenomenon triggered by the infection is unclear.(3)

The disease is characterised by a spontaneous recovery over several weeks with near-complete recovery of vision (most patients have a final vision of greater than 6/7.5)(1-3). There has been a single case report of recurrent AIM.5 After resolution of the macular detachment, a lasting ‘‘bull’s-eye’’ pattern composed of RPE hyperpigmentation surrounded by hypopigmented atrophic changes develop at the site of the previous serous retinal detachment.(1-3) The OCT demonstrates resolution of the subretinal fluid but variable recovery of the ellipsoid layer (photoreceptors). This longstanding RPE damage can predispose to late choroidal neovascularisation.(2)