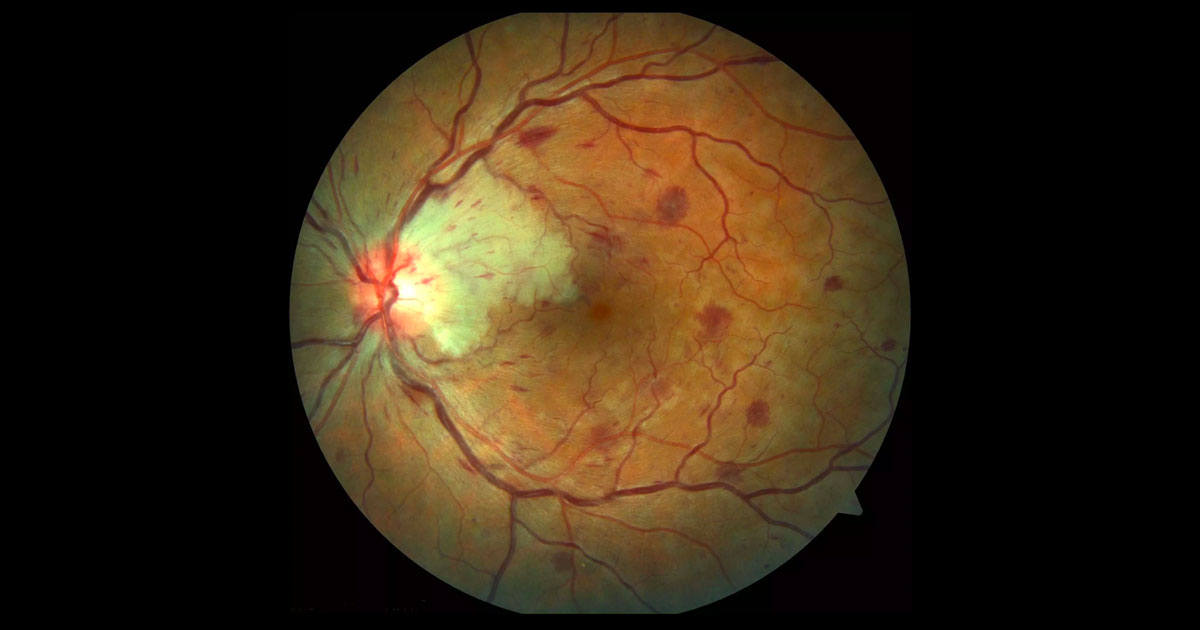 Figure 1. Colour fundus photography of the left eye shows four quadrant intraretinal haemorrhages and engorgement of the retinal veins. There is a patch of white retina adjacent to the optic nerve.

A 37-year-old female student from Germany presented to her optometrist after waking with vision loss in her left eye. There was no obvious precipitant. The optometrist noted widespread intraretinal haemorrhages and an area of pale retina and referred her urgently for further opinion and management.

Past ophthalmic history was unremarkable. Past medical history included a 20 pack-year history of smoking. There was no history of hypertension, diabetes or clotting disorders. She was not taking the oral contraceptive pill.

Visual acuities were 6/5 in the right eye (OD) and 6/36 (no improvement with pinhole) in the left eye (OS). Intraocular pressures were 16mmHg (OD) and 17mmHg (OS). There was no relative afferent pupil defect, suggesting normal optic nerve function. In the left eye there were four quadrant dot and blot intraretinal and flame haemorrhages (Figure 1). The retinal veins were dilated and the optic nerve mildly swollen. There was an area of retinal whitening between the optic nerve and fovea. The macula appeared swollen. There were no inflammatory cells, nor evidence of rubeosis. The right fundus was normal.

Fluorescein angiography demonstrated delayed venous filling in the left eye consistent with a non-ischaemic central retinal vein occlusion (Figure 3). The cilioretinal artery that would normal fill to supply the area of pale retina did not fill properly.

Figure 3. Left fundus fluorescein angiography. There is delay in filling of the retinal veins. Dark patches represent blocked fluorescence from retinal haemorrhages. There is relative hypofluorescence within the area of white retina due to blockage of fluorescence. No retinal emboli are identified. Macula and peripheral perfusion are intact.

The patient was encouraged to seek aid from her general practitioner with regards smoking cessation. Given that vision can improve spontaneously following a combined non-ischaemic CRVO and cilioretinal artery occlusion, a decision was made to proceed conservatively with close follow-up. This was preferred by the patient, over the alternative of intravitreal anti-VEGF treatment.

At 6 week review vision had improved to 6/6-. The area of retinal whitening corresponding to the cilioretinal artery occlusion had resolved. The venous system was less engorged and the optic nerve head swelling had disappeared. The intraretinal haemorrhages remained. The macula oedema had resolved on OCT imaging.

Figure 4. A) The area of retinal whitening corresponding to the cilioretinal artery occlusion has resolved. The venous system is less engorged and the optic nerve head swelling has disappeared. B) Left optical coherence tomography (horizontal raster scan) through the macula 6 weeks after presentation demonstrates resolution of macula oedema.

The patient returned to Germany. It is anticipated that the retinal haemorrhages will continue to resolve over the next 6-12 months.

The clinical findings in central retinal vein occlusion (CRVO) are of four quadrant intraretinal haemorrhages (dot, blot and flame) and dilation and tortuosity of the retinal veins. A CRVO can be classified as nonischaemic or ischaemic based on the degree of nonperfusion on angiography. In nonischaemic CRVO, vision loss can occur from cystoid macula oedema. Ischaemic CRVO has a less favourable prognosis with vision loss due to foveal ischaemia or development of rubeotic glaucoma, in addition to cystoid macula oedema.

The most common risk factors for combined CRVO and cilioretinal artery occlusion are hypertension, diabetes, hypercholesterolemia and smoking.(3) In younger patients vasculitic, haematological and procoagulant conditions should be considered.(3) Isolated cilioretinal artery occlusions in elderly patients should be considered to be due to giant cell arteritis until proven otherwise.

If there is persisting macula oedema causing vision loss, intravitreal anti-VEGF therapy (e.g. bevacizumab, ranibizumab or aflibercept) may be considered.(4,5)