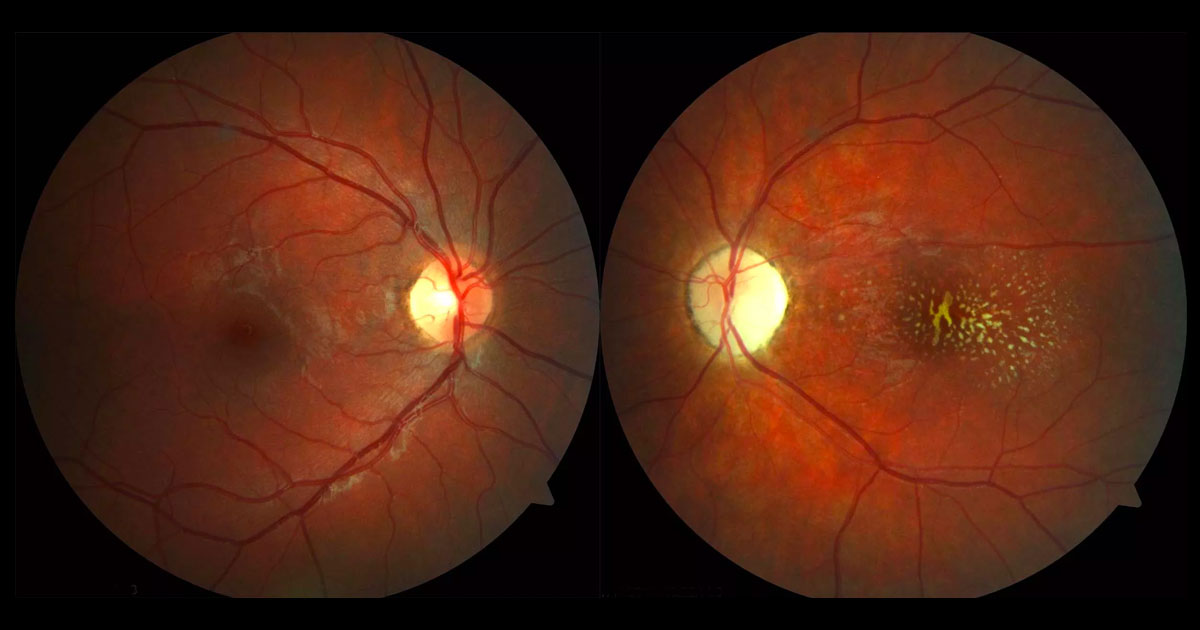 A 13-year-old girl was referred with a three month history of seeing “black spots” in her left vision.

A 13-year-old emmetropic Caucasian girl was was referred by her optometrist after noticing “black spots” in her left vision over the last 3 months. This was first noticed when she closed her right eye to look through a camera viewfinder. She had no significant past ocular history and was otherwise healthy. She denied recent overseas travel and admitted to having three pet cats.

Blood pressure was 128/104mmHg. Visual acuities were 6/5 in the right eye (OD) and 6/15 in the left eye (OS). Fundus examination demonstrated yellow deposits at the left macula with a pale optic disc. (Figure 1). There was no intra-ocular inflammation. The right fundus was normal.

The combination of optic neuropathy and a lipid (hard exudate) deposition in the configuration of a “macular star” is consistent with neuroretinitis. In this patient the optic nerve is pale, not swollen and there was no macular oedema or subretinal fluid (see below) suggesting that the pathology was chronic. The differential diagnosis of neuroretinitis includes:

Figure 2. Optical coherence tomography images demonstrates hyper-reflective deposits in the left eye at the level of the retinal pigment epithelium and photoreceptors. There is no macular oedema.

The most likely diagnosis is an old neuroretinitis secondary to Bartonella henselae (cat-scratch disease).

Neuroretinitis is characterised by papillitis and stellate macular exudates.(1) The most common cause of neuroretinitis is cat-scratch disease,(2-4) caused by the gram negative bacterium Bartonella henselae. The primary host reservoir for Bartonella henselae are cats, between which it is transmitted by Ctenocephalides felis, or the cat flea. The modes of transmission from cat to humans include: a cat-scratch by claws contaminated with cat flea faeces; or cat, cat flea, fly or tick biting.(3) Children and young adults appear to be more susceptible, with the greatest number of cases being reported in late autumn and early winter.(4) Following a cat scratch a pustule forms at the site of the scratch and is associated with regional lymphadenopathy and fever. About 5% of patients who suffer from cat scratch disease develop Parinaud oculoglandular syndrome (POGS): unilateral follicular conjunctivitis and preauricular, submandibular and cervical lymphadenopathy. Other ocular manifestations include:(4,5)

The neuroretinitis is usually unilateral but bilateral cases have been reported.(7) In the acute stages there is disc swelling (papillitis) with peripapillary subretinal fluid and macular oedema. Retinal haemorrhages and cotton wool spots may be present. The hard exudate deposition that forms a macular star is often delayed or may even never occur.(2,4)

Diagnosis can usually be made by the clinical presentation in conjunction with positive IgG and IgM serology whilst excluding other causes. Polymerase chain reaction (PCR) can be used in cases with inconclusive serology.(8)

There is no consensus as to the best treatment for neuroretinitis secondary to Bartonella henselae.(4) Various antibiotics have been used, including: fluoroquinolones (eg. ciprofloxacin), tetracyclines (eg. doxycycline), macrolides (eg. clarithromycin, azithromycin), trimethoprim-sulfamethoxazole and rifampin. Systemic steroids have also been prescribed. Although the visual prognosis following neuroretinitis secondary to Bartonella henselae is often favourable(2), visual deficits, such as in this patient, may be permanent. Re-infection is rare due to the development of immunity.(4)