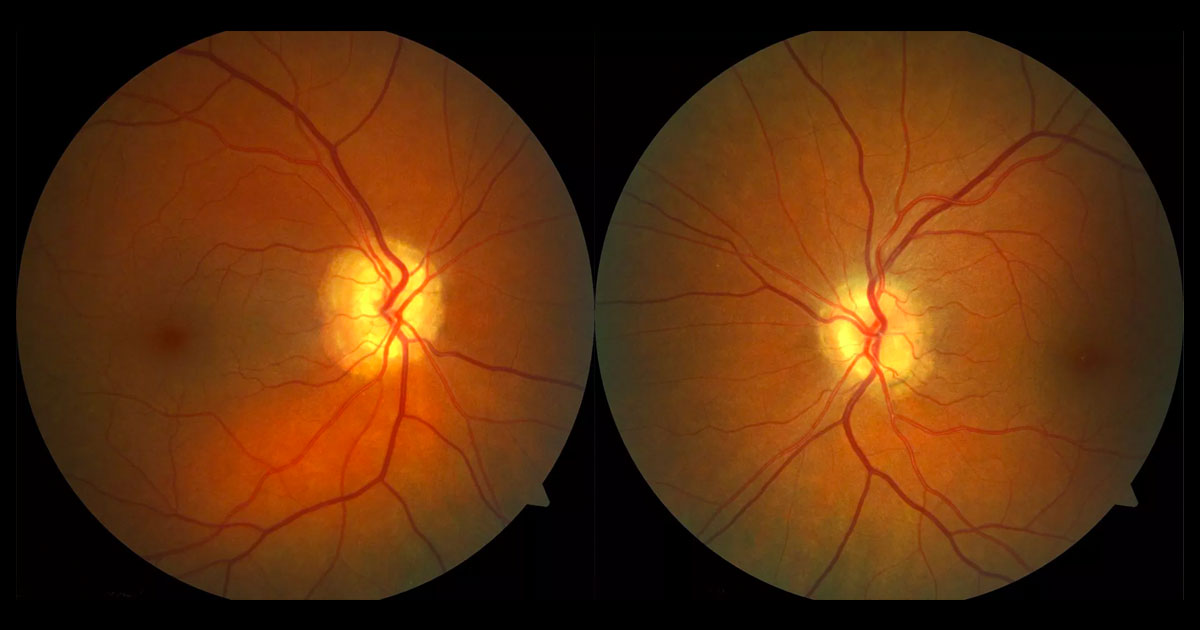 Figure 1. Prominent optic discs are seen in both eyes with small cup:disc ratios.

A 46-year-old lady was referred by her optometrist with an abnormal optic disc appearance and flashes in her right eye.

A 46-year-old lady was referred by her optometrist with abnormal optic disc appearances and flashes in her right temporal visual field over the last 2 weeks. These flashes were most noticeable when she viewed a white wall or bright light. Past medical history included breast carcinoma treated with surgery, chemotherapy and radiation.

The patient was a low hypermetrope. Visual acuity was 6/6 in the right eye (OD) and 6/5 in the left eye (OS). Intraocular pressures were 23mmHg OD and 22mmHg OS and central corneal thicknesses were normal. Anterior segment examination was normal. Fundus examination demonstrated a prominent optic discs without blurring of the disc margins, haemorrhage, lipid or subretinal fluid (Figure 1). Cup:disc ratios were 0.1 in each eye. The posterior hyaloids were still attached. Maculae and retinal peripheries were normal with no evidence of a retinal break.

Blood pressure as measured in the rooms was normal. Fundus autofluorescence showed marked hyperautofluorescence within the optic discs (Figure 2). Optical coherence tomography (OCT) scans through the optic discs showed a granular appearance (Figure 3). OCT of the retinal nerve fibre layer (OCT RNFL) showed thinning superior and inferiorly in the right eye and inferiorly in the left (Figure 4). A B-scan ultrasound showed hyper-reflectivity with shadowing at the optic disc (Figure 5). Humphrey visual fields (HVF) showed a superonasal scotoma in the right eye and nasal step in the left (Figure 6).

Figure 3. Optical coherence tomography of the right optic disc shows a granular appearance within the nerve.

Figure 6. Humphrey visual field testing shows a superonasal scotoma in the right eye and nasal step in the left.

The diagnosis was explained to the patient and she was reassured that both the optic nerve head drusen and flashes were benign. Despite elevated intraocular pressures and changes on the OCT RNFL and HVF there were no clinical signs of glaucoma on optic nerve head assessment. It was presumed that the OCT RFNL and HVF changes were secondary to the optic nerve head drusen. The patient was asked to return in 3 months for repeat intraocular pressure testing, as ocular hypertension remains a possibility. Symptoms of retinal detachment (an increase in flashes, floaters or visual field defect) were described and the patient advised to present immediately if these occurred.

Optic disc drusen are hyaline, calcified bodies found in the optic nerve head anterior to the lamina cribrosa.(1,2) They may be visible at the surface or buried within the nerve head, and are often associated with anomalous tortuous, branching or looping retinal vessels.(1) The prevalence has been reported as 0.2-2.4%.(1,3) Although most cases occur in isolation, they may also be associated with retinitis pigmentosa, pseudoxanthoma elasticum and Alagille syndrome.(1)

Symptoms occur in approximately 50% of cases, and may include visual field loss and/or changes in visual acuity.(1) Visual field loss is more commonly associated with visible than buried drusen, and when there is concomitant ocular hypertension,(4) as seen in the patient presented. The most common scotomas are inferonasal sectoral and inferoarcuate.(1) Larger drusen and those that occupy a greater area of the optic canal are associated with more retinal nerve fibre layer abnormalities.(2) Visual acuity defects are mild, with 98% of patients having a vision of 6/9 or better, but optic disc drusen can cause transient visual obscurations.(1) In addition to the drusen affecting vision themselves (presumably due to axonal compression), they may be associated with choroidal neovascularisation, retinal vascular occlusions and haemorrhage.(2)

Differentiating between optic disc drusen and true causes of optic disc swelling (papillitis) is extremely important. Features that may suggest papillitis include:(5)