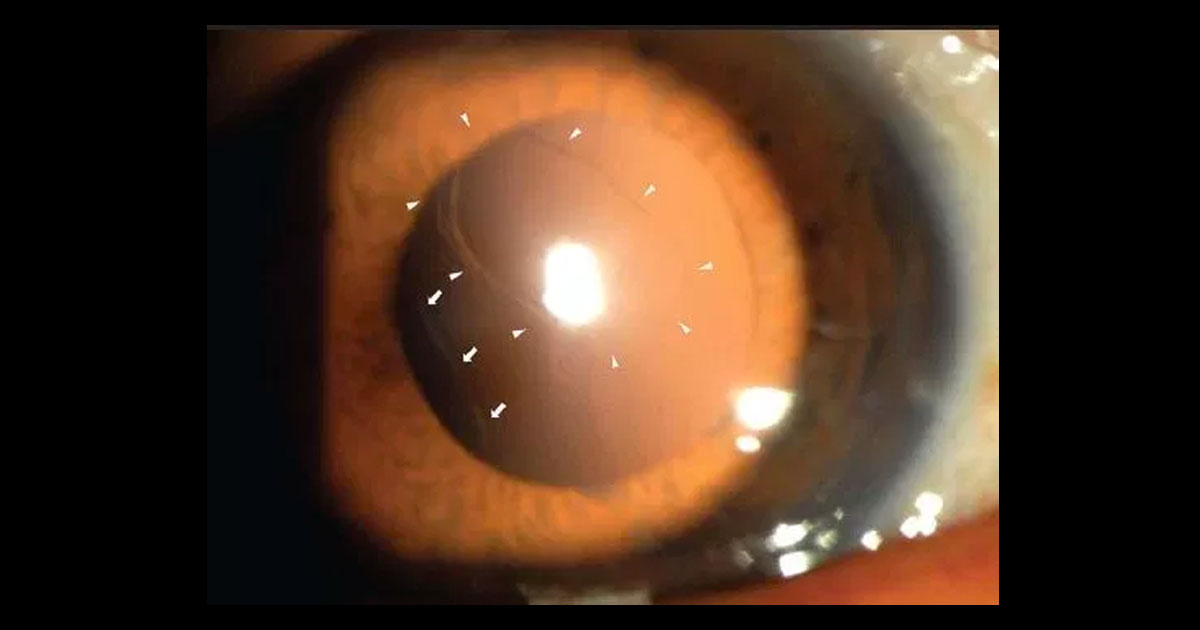 A 72-year-old male was referred with reduced vision in his right eye following cataract surgery.

A 72 year old diabetic male was referred from his general ophthalmologist with reduced vision in his right following cataract surgery 6 months earlier. The surgery was complicated intraoperatively by posterior capsule tear, necessitating anterior vitrectomy and placement of a sulcus intraocular lens.

Best corrected visual acuity was 6/18 in the right eye (OD) and 6/6 in the left eye (OS). Intraocular pressures were 13mmHg in both eyes. Examination of the anterior segment revealed a quiet anterior chamber, with a sulcus intraocular lens and several posterior capsular tears (Figure 1). Examination of the posterior segment revealed a quiet vitreous, with thickening of the fovea. There was no sign of retained nuclear material in the vitreous following the capsular rupture. There was no clinical evidence of diabetic retinopathy. Optical coherence tomography (OCT) demonstrated cystoid macular oedema (figure 2).

The patient had been taking topical Prednefrin Forte and Acular drops four times a day since the time of surgery with minimal improvement in vision.

Fluorescein angiography demonstrated petalloid leakage in the right macula and late disc staining (Figure 3). There were no diabetic changes noted.

Figure 3. Fluorescein angiography demonstrated a petalloid pattern of leakage in the right macula and late disc staining. No diabetic vascular changes are seen. No disc staining is seen in the late image of the left eye.

The patient was treated initially with two monthly intravitreal injections of Avastin with partial improvement in the oedema and vision to 6/12.

A single intravitreal injection of triamcinolone was performed, with subsequent resolution of the oedema and improvement in vision to 6/9. The patient has remained stable over the subsequent 12 months with stable intraocular pressure.

Pseudophakic cystoid macular oedema, also known as Irvine-Gass syndrome, is one of the most common causes of reduced vision following cataract surgery. Peak incidence is at 4-6 weeks post-operatively(1). With modern small incision surgery, it has been reported to occur in up to 2% of cases(1), although OCT evidence of oedema that is not clinically significant may be detected in a much higher percentage of cases.

Whilst the pathophysiology is not completely understood, the upregulation of various inflammatory cytokines following surgery is believed to lead to an increase in vascular permeability in the macular capillaries, with subsequent accumulation of fluid(2).

Factors that are pro-inflammatory, such as intraoperative vitreous loss or iris trauma, or a previous history of uveitis, are known to increase the risk for this complication occurring(2). Diabetic retinopathy, and in particular a previous history of diabetic macular oedema, is also a known risk factor, due to the effect this condition has on endothelial permeability in the macular blood vessels (3). For this reason, in patients with previous macular oedema it is generally best to allow at least 3 to 6 months of documented macular stability before proceeding with planned cataract surgery.

The majority of clinically significant cases will resolve with topical steroid and non-steroid anti-inflammatory (NSAID) drops (4). These are usually used in a frequency of 4 to 6 times per day for several months. Some surgeons routinely use these drops pre-operatively to reduce the risk of macular oedema occurring.

In eyes with vitreous incarcerated in the corneal incision wounds as a result of complicated surgery, YAG laser vitreolysis to break the vitreous strand may be of benefit. Significant vitreomacular traction can be released with vitrectomy.

For cases that fail to respond to topical treatment, the options include periocular steroids, intravitreal anti VEGF agents or intravitreal triamcinolone. Studies have demonstrated that periocular steroid injections (orbital floor or sub-tenons injections) can be beneficial (5). However such treatment does pose the risk of raised intraocular pressure. Early evidence also supports a potential role for intravitreal anti-VEGF agents (6,7), which avoids the risk of raised IOP, but does carry a small risk of endophthalmitis. In my experience, where these treatments have failed to produce an adequate response, the use of intravitreal triamcinolone is indicated (8), as this technique allows the delivery of a maximal dose of steroid to the macula. The higher risk of raised IOP, in conjunction with the risk of endophthalmitis, is why I limit this treatment to the most recalcitrant cases.