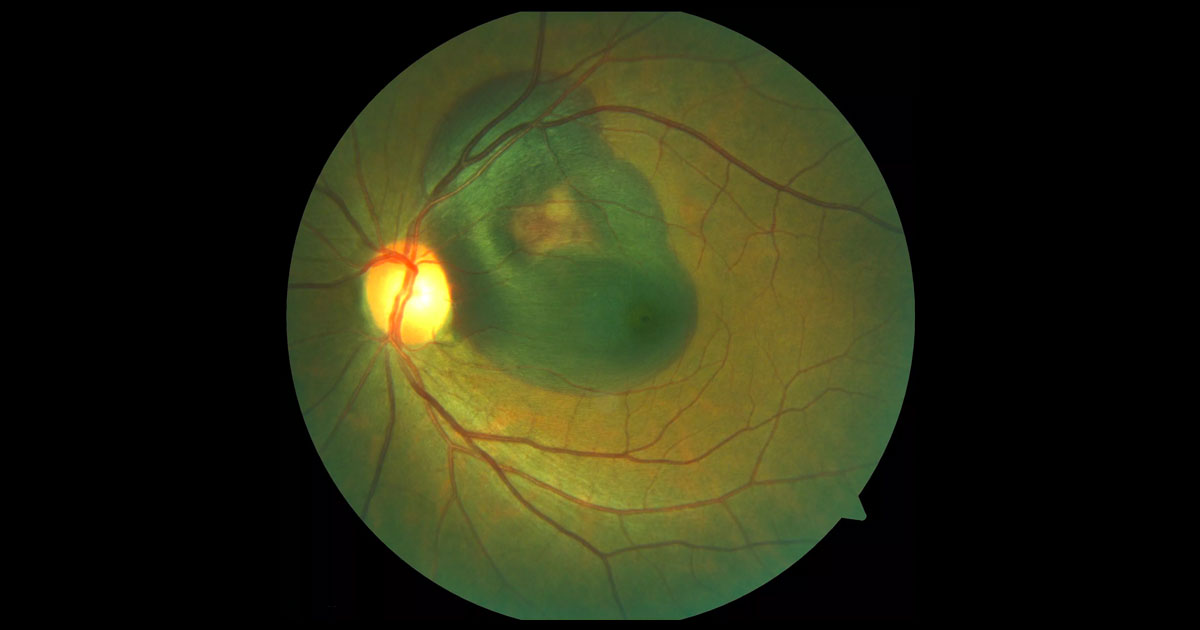 A 59-year-old female was referred with acute painless loss of central vision in her left eye.

A 59-year-old Asian female presented to her optometrist 5 days after noting sudden loss of central vision in her left eye. She had no significant past ocular or medical history. The optometrist noted a large left submacular haemorrhage and referred her urgently for a further opinion and management.

The potential aetiology of a submacular haemorrhage include:

Optical coherence tomography (OCT) through the left macula confirmed the subretinal location of the haemorrhage evident as a hyporeflective space and associated shadowing effect. Additionally there were sharply elevated pigment epithelial detachments both at the level of the fovea (Figure 2A) and at locations corresponding to the reddish-orange polyp-like lesions seen clinically (Figure 2B). Both fundus fluorescein angiography (Figure 3) and indocyanine green angiography (ICG, Figure 4) demonstrated blocked fluorescence due to the haemorrhage and focal leakage superonasal to the fovea.

Figure 2.A) Left optical coherence tomography through the fovea demonstrating the subretinal location of the haemorrhage. B) Two sharply elevated pigment epithelial detachments are seen in a horizontal optical coherence raster scan taken superior to the fovea. These correspond with the polypoidal lesions noted clinically.

After discussing the findings, diagnosis and treatment options with the patient an intravitreal injection of ranibizumab was administered and prompt surgery with left pars plana vitrectomy, injection of subretinal tissue plasminogen activator (t-PA) and pneumatic displacement of the haemorrhage was arranged (Figure 5). The later involved concluding the surgery with a fluid-gas exchange and postoperative ‘gaze down’ posturing.

Figure 6. Postoperative left fundus photograph. There has been displacement the submacular haemorrhage with only mild residual haemorrhage remaining. The reddish-orange polypoidal lesions can still be seen superior to the fovea.

Figure 7. A) Postoperative optical coherence tomography scans taken horizontally through the level of fovea and B) superior to the fovea. Note the significant resolution of the submacular haemorrhage but persistence of the pigment epithelial detachments.

Submacular haemorrhages can occur in the context of a number of conditions including exudative age-related macular degeneration ruptured and retinal arterial macroaneurysms. Patients typically present with sudden painless loss of central vision corresponding to the extent of the haemorrhage.

Although submacular haemorrhages may resolve spontaneously with time, the visual outcomes associated with natural history are often poor. This is as a result of photoreceptor damage secondary to iron toxicity, shearing as the clot contracts and impairment of nutrient exchange. For this reason timely displacement of thick submacular (subretinal) haemorrhages needs to be considered and there are a number of techniques available typically involving tissue plasminogen activator (t-PA) and gas.(1) Tissue plasminogen activator is a serine protease with fibrin-specific thrombolytic activity that leads to liquefaction of blood clots. Subretinal injection of t-PA has the benefit that it allows delivery of t-PA directly into the subretinal space. There is controversy as to whether intravitreal t-PA will effectively diffuse across an intact neural retina. Once liquefied, displacement of the haemorrhage is achieved using intraocular gas and positioning of the patient in either a prone or gaze down position. Sub-retinal pigment epithelial haemorrhage (sub-RPE) cannot be displaced, so it is important to determine with clinical examination, OCT and fundus autofluorecence whether the blood is predominantly subretinal or sub-RPE.

In addition to displacing the submacular haemorrhage it is also important to treat the underlying pathology, which in this case was polypoidal choroidal vasculopathy (PCV). This condition is more common in Asian patients and has been considered to be a unique phenotype of age related macular degeneration.(2) It is characterized by abnormalities of the choroidal vasculature, including inner branching vascular networks that terminate as reddish-orange polypoidal lesions. As in this case it may be associated with exudation and massive haemorrhage.(2) The lesions often appear on OCT images within pigment epithelial detachments (PEDs), and thus represent a form of Type 1 (sub-retinal pigment epithelial) choroidal neovascularisation. Focal polypoidal hyperfluorescence on indocyanine green angiography is highly characteristic of PCV.(3)