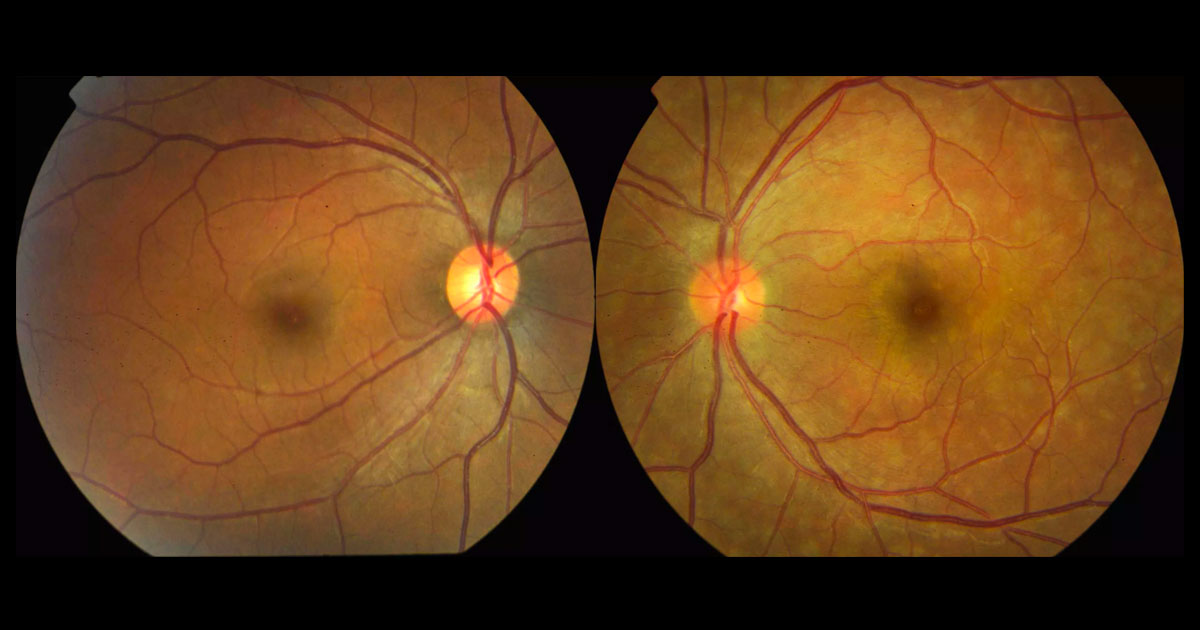 A 29-year-old woman was referred with blurred vision and flashes in her left eye.

A 29-year-old moderately myopic (-2.50D) female surveyor presented with a 2-week history of photopsia, “little dots” and blurring of her left vision. She denied any recent viral illness. There was no significant past ophthalmic history, and past medical history consisted only of mild asthma. She denied recent travel and took no regular medications.

Visual acuities were 6/5 right eye and 6/12 left eye. There was a subtle left relative afferent pupillary defect (RAPD). Intraocular pressures were 13mmHg bilaterally. Both the anterior chamber and vitreous were quiet. At the left macula there were multiple white coloured spots at the level of the outer retina. There was some mild blurring of the disc margin, but no retinal vasculitis. The right fundus was normal (Figure 1).

The differential diagnosis white dots at the macula includes:

Optical coherence tomography (OCT) of the left macula showed multiple disruptions in the outer retina at the ellipsoid level (“inner segment/outer segment junction”), consistent with photoreceptor injury. There also were hyperreflective spicule-like lesions in the outer nuclear layer (Figure 2). The right macula OCT was normal. Multiple hyperautofluorescent lesions were found in the left posterior pole, especially in the paramacular region, extending nasal to the optic disc (Figure 3). Fluorescein angiography (FA) of the left eye showed hyperfluorescence in a “wreath like” pattern (Figure 4). The right FA was normal.

Figure 2. Optical coherence tomography (OCT) superior to (A) and through (B) the left fovea shows disruption of the ellipsoid layer (“inner segment/outer segment junction”), consistent with photoreceptor injury. There are also some hyper-reflective spicule like lesions in the outer nuclear layer (A). The dots are also highlighted in the near-infrared images to the left. The right macula OCT was normal.

The findings and a diagnosis of MEWDS was discussed with the patient. It was explained that no treatment was indicated as it is typically a self-limiting condition. Three weeks later the patient reported that her symptoms had improved significantly with a reduction of photopsia. Her left vision had improved to 6/9, and fundus autofluorescence and OCT scans had almost returned to normal (Figures 5 and 6). By 8 weeks her left visual acuity had returned to 6/6. The blurred disc margins and RAPD had resolved.

Figure 5. Optical coherence tomography at 3-weeks shows the photoreceptor layer returning to normal. Note the foveal granularity in the near-infrared image to the left.

Figure 6. Fundus autofluorescence at 3-weeks shows a significant reduction in hyperautofluorescent lesions at the left macula.

Multiple evanescent white dot syndrome (MEWDS) is a rare condition often affecting young females and presenting as sudden visual loss, paracentral scotomas, and photopsia. A preceding influenza-like illness is often described. In 80% of cases, the condition remains unilateral.(1) The white deep retinal lesions may be subtle, and as there can be mild disc swelling and an RAPD, occasionally MEWDS is misdiagnosed as an optic neuritis, particularly as it also occurs in young females. High resolution OCT scans of the macula aid in the diagnosis of MEWDS, as they show disruption of the photoreceptor layer.(2,3) Fundus autofluorescence is an excellent non-invasive investigation that can highlight the lesions well, even when they are difficult to visualise on fundoscopy.(4)

If performed, indocyanine green angiography normally shows late phase hypofluorescent corresponding to the white dots. This suggests some disturbance to the choroidal circulation. At present, the pathogenesis is unclear, but it is likely due to either RPE inflammation or choroidal ischaemia.(5)

MEWDS is usually a self-limited disease, and recovery of visual function occurs over several weeks. Retinal imaging can aid monitor progression and often demonstrates resolution of the signs over the ensuing months. Foveal granularity can develop and persist.

* Figure 1 colour images are from a different but representative patient with MEWDS.