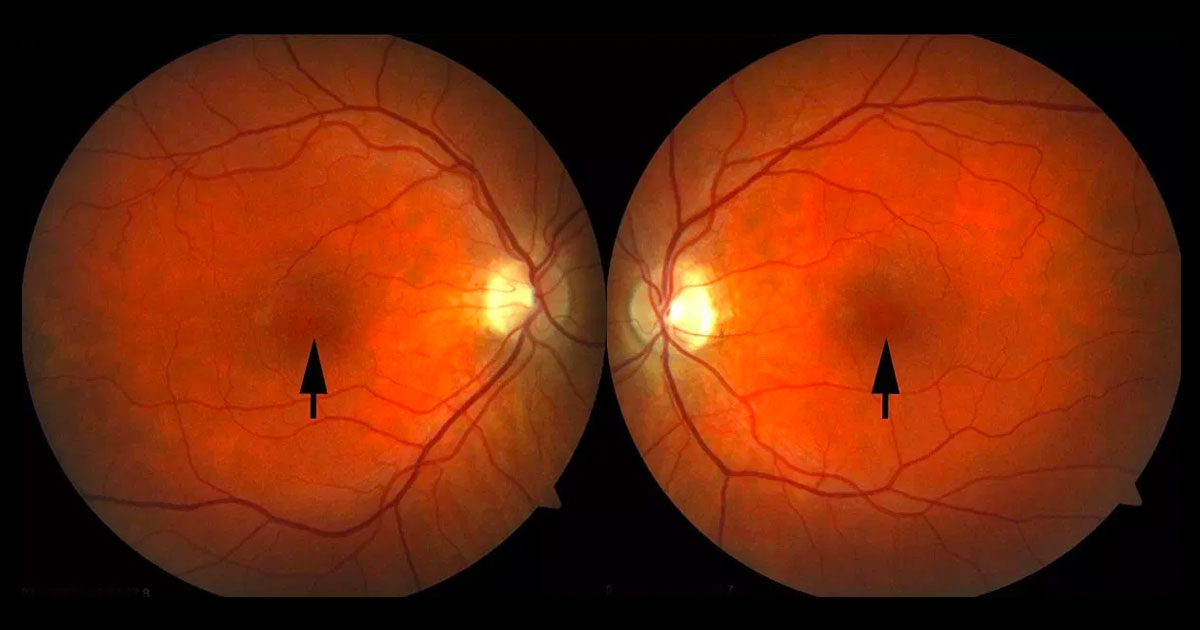 A 39-year-old man was referred with gradual loss of vision in both eyes noted over the last six months.

A 39-year-old male information technology professional was referred by his general ophthalmologist with gradual bilateral vision loss noted over the last six months.

The patient was a mild myope. He had been seen by his optometrist one month prior with no change in refraction noted. He had a four year history of human immunodeficiency virus (HIV), with no antiretroviral treatment required due to his low viral load and high CD4 count. He did not take any medications. He was an occasional smoker and denied recreational drug use. There was a family history of advanced age-related macular degeneration with both maternal grandparents having suffered from the condition.

Visual acuities were 6/15 in the right eye (OD) and 6/18 in the left eye (OS). Refraction was -2.25DS (OD) and -2.25/-0.50×168° (OS). Fundus examination demonstrated subtle yellow dots at both foveae, larger on the left (Figure 1). The posterior hyaloids were still attached in both eyes and the optic discs and retinal vessels were normal. There was no intra-ocular inflammation.

The differential diagnosis for yellow foveal spots has been presented in a previous Case of The Month- May 2014 and includes:

Optical coherence tomography (OCT) scans through both foveae demonstrated domed shape outer retinal elevations as well as subfoveal ellipsoid layer (inner/outer segment) loss (Figure 2). There was no vitreomacular traction, macula hole or cystoid macula oedema. Autofluorescence imaging did not demonstrate any hyperautofluorescent material, which would be seen in adult vitelliform foveomacular dystrophy (Figure 3). Fluorescein angiography was normal with no leak as might be seen in central serous chorioretinopathy (Figure 4).

Figure 4. Fluorescein angiography is normal with no angiographic macular oedema.

The patient denied sungazing or laser pointer exposure. Although denying recreational drug use when initially questioned, on further questioning the patient finally admitted to chronic alkyl nitrite popper inhalation over 5 to 10 years (“For me it’s like alcohol…. I take amyl two to three times a week”).

The diagnosis was explained to the patient and he was advised to stop using poppers. At review 6 weeks later he reported reducing his popper use but was not completely convinced that poppers were responsible for his poor vision because he had been using them for so many years without consequence. Vision and fundus appearance was unchanged with persistent yellow spots at both foveae. The OCT still demonstrated subfoveal ellipsoid loss however the outer retinal dome shaped elevation was flatter with the loss of the hyporeflective component (Figure 5) compared to the initial OCT scans.

Alkyl nitrite compounds, more commonly known as “poppers” are inhaled recreationally often as an aphrodisiac and to improve sexual performance. They are most commonly used in the homosexual and clubbing communities, and are believed by users to be very safe compared to other recreational drugs.(1,2)

Although poppers have been used as recreational drugs for many decades the first series of patients with popper retinopathy was only published in 2010.(1) A French group described four patients who experienced a phosphene, or bright light, in their central vision after inhaling alkyl nitrite poppers.(1) Clinically there were yellow spots at the patient’s fovea and the OCTs demonstrated outer retinal/ photoreceptor disruption similar in appearance to photic maculopathy. A number of other small series have recently been published.(1-3) The increasing number of cases is thought to be due to a change in the most commonly used popper compound from isobutyl nitrite to isopropyl nitrite to escape legislative measures preventing their sale.(2)

Clinically there are two forms of popper retinopathy; acute toxicity and prolonged use.(1-3) In acute toxicity(1,2) patients present with a central phosphene, a yellow foveal spot (Figure 6) and focal disruption of the ellipsoid layer and outer retina on OCT. Patients with acute toxicity appear to have a reasonably good prognosis for functional improvement following cessation.

Figure 6. Right colour fundus image of a 28-year-old male who presented with acute popper retinopathy 18 hours after inhaling a popper. His symptom was of a central bright spot in his vision. A prominent yellow dot is seen at the fovea.

Prolonged use of poppers such as in this case can present a more challenging diagnosis.(3) As opposed to patients presenting with acute toxicity, prolonged users present with a history of subacute vision loss. These patients will still have a yellow spot at fovea. The OCT shows a larger defect in the ellipsoid and may have a dome shaped elevation at the macula as in this case. The visual acuity is usually worse at presentation and the visual prognosis with cessation is more guarded. As many prolonged users have been using poppers for many years before developing visual problems they sometimes do not believe their poor vision is due to popper use and may continue using them.