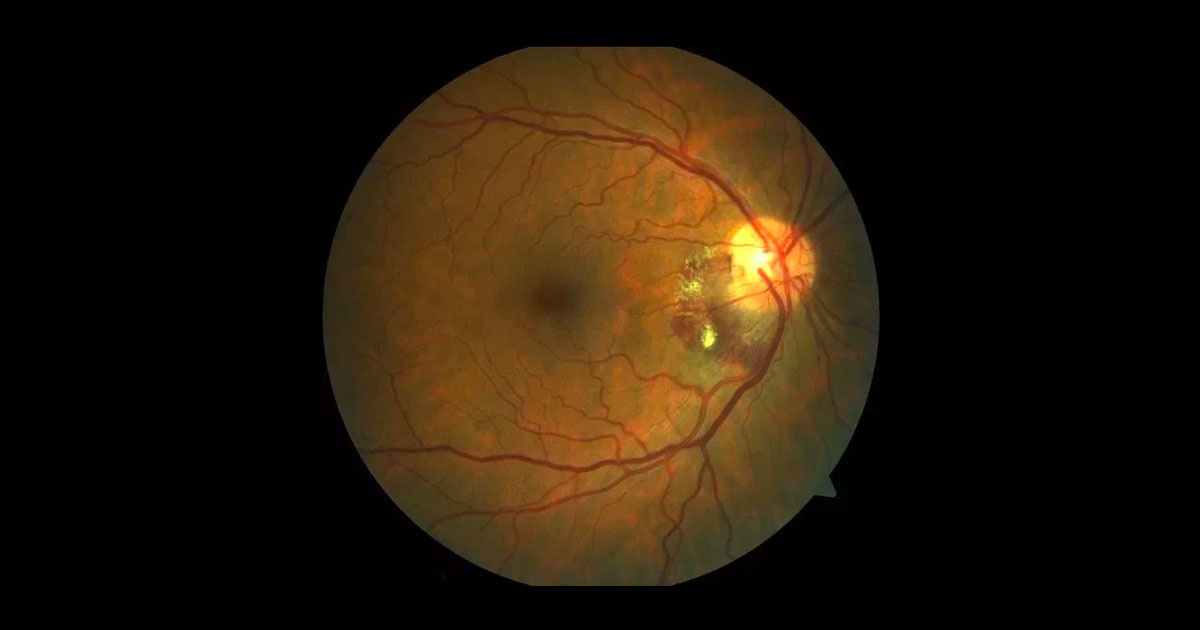 A 65-year-old female patient was referred with incidental bleeding in her right eye.

A 65-year-old Caucasian female patient was referred by her optometrist with incidental bleeding in her right eye. The patient did not report any visual concerns. She was a non-smoker and had no significant past ocular or medical history.

On examination her best corrected visual acuities measured 6/7.5 right eye (OD) and 6/6 left eye (OS). Intraocular pressures were normal and anterior segment examination was unremarkable. Posterior segment examination demonstrated subretinal haemorrhage and exudate at the inferotemporal aspect of the right optic disc (Figure 1). No significant pathology was evident at the central macula of either eye or left optic nerve.

Optical Coherence Tomography (OCT) imaging through the affected area demonstrated a hyper-reflective subretinal elevation with adjacent haemorrhage and hard exudate (Figure 2). Fundus fluorescein angiography showed a focus of increasing hyperfluorescence consistent with the diagnosis of a peripapillary CNV (Figure 3). There was no polyp evident on indocyanine green angiography (ICG) (Figure 4). 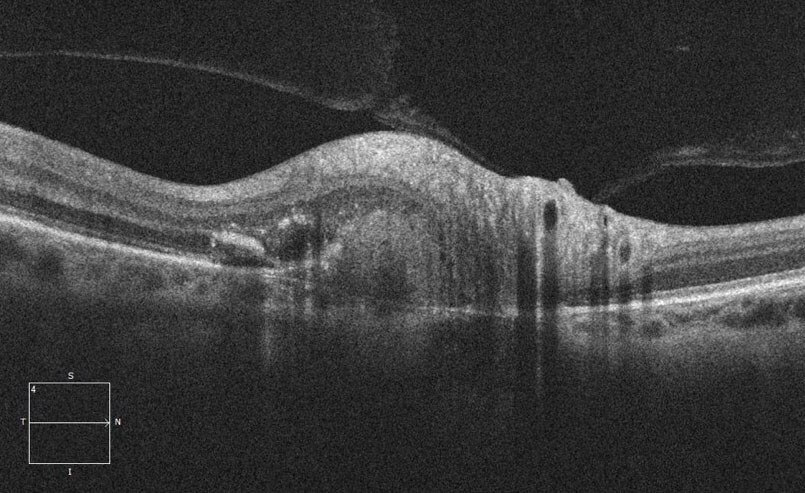 Figure 3. Early (A) and late (B) fundus fluorescein angiography demonstrates an area of increasing hyperfluorescence. Adjacent to this is an area of blocked fluorescence due to the overlying haemorrhage. 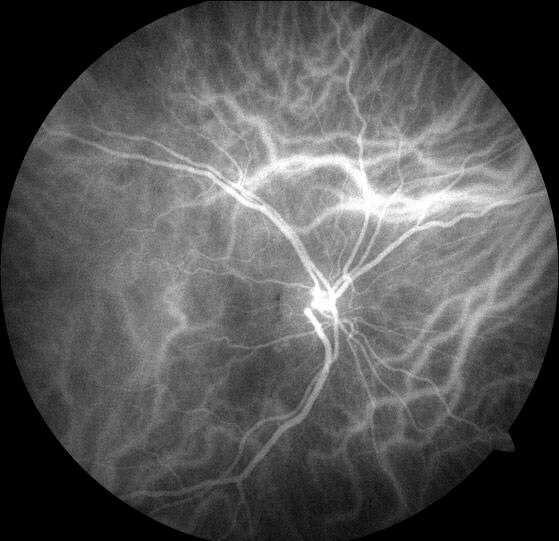 Figure 4. Indocyanine green angiography did not demonstrate any polyps.

The findings and diagnosis of a peripapillary CNV was discussed with the patient. Her options were outlined which included careful observation or treatment with anti-VEGF therapy +/- laser photocoagulation.

After administration of 3 monthly Bevacizumab (Avastin) injections there was a significant improvement in the findings with resolution of the haemorrhage and only mild residual hard exudate (Figure 5). Repeat FFA (Figure 6) demonstrated a smaller better defined focal area of hyperfluorescence which was treated with focal laser photocoagulation. Further follow up demonstrated complete resolution of the clinical findings (Figure 7) with no recurrence at the 12 month and 24 month follow up visits. 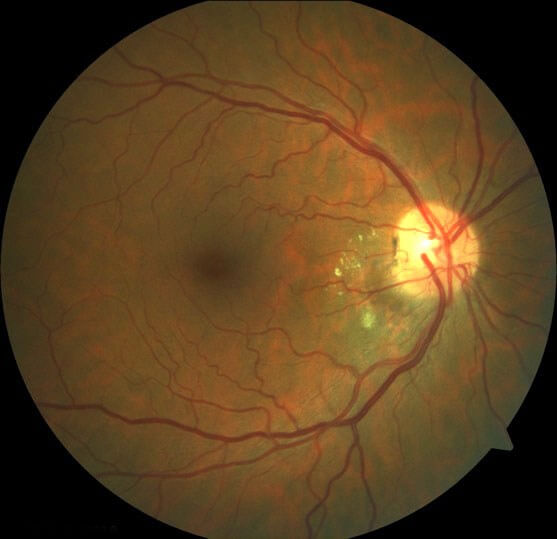 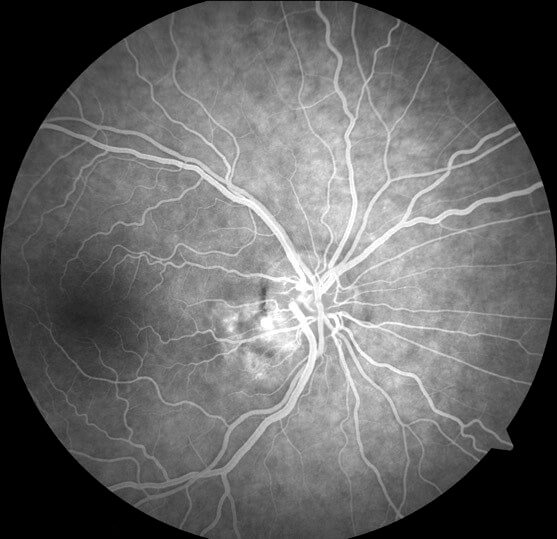 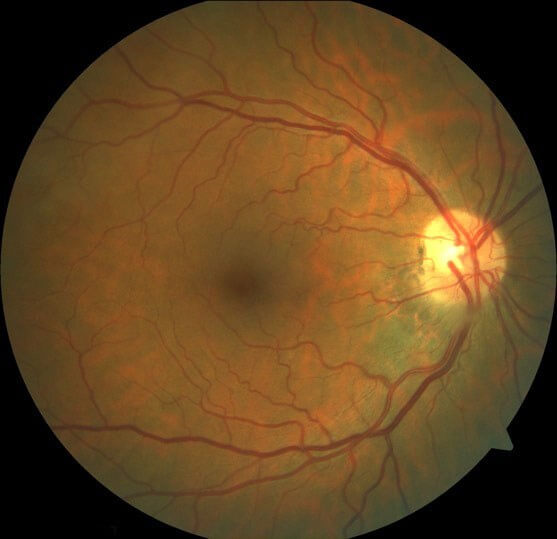 Peripapillary choroidal neovascular membranes (CNV) account for 10% of all choroidal neovascularisation and have a female preponderance. They are typically associated with age-related macular degeneration (45%) or can be idiopathic (39%).(1) Polypoidal choroidal vasculopathy is also a possible causative factor, especially in Asian patients.

As in our patient, peripapillary CNV may be an asymptomatic finding. They may however cause visual loss if the haemorrhage or exudate extends to involve the central macula. Whilst observation is sometimes appropriate (especially for those on the nasal side of the optic disc), if left untreated up to 25% of cases will progress and can have poor visual outcomes.(2) Better outcomes are seen if the CNV is treated early whilst they are small and before they encroach on the fovea.(3)

Combined therapy with anti-VEGF and laser photocoagulation has been demonstrated to successfully manage peripapillary CNV without the need for frequent retreatment.(4) As in our patient, Bevacizumab will often lead to resolution of the haemorrhage and exudate as well as possible involution of the CNV. Subsequent laser can be applied to a smaller, better defined area thus limiting thermal collateral damage to the neurosensory retina. Whilst this strategy may achieve stability over extended periods of time, patient do need to be monitored for recurrence.