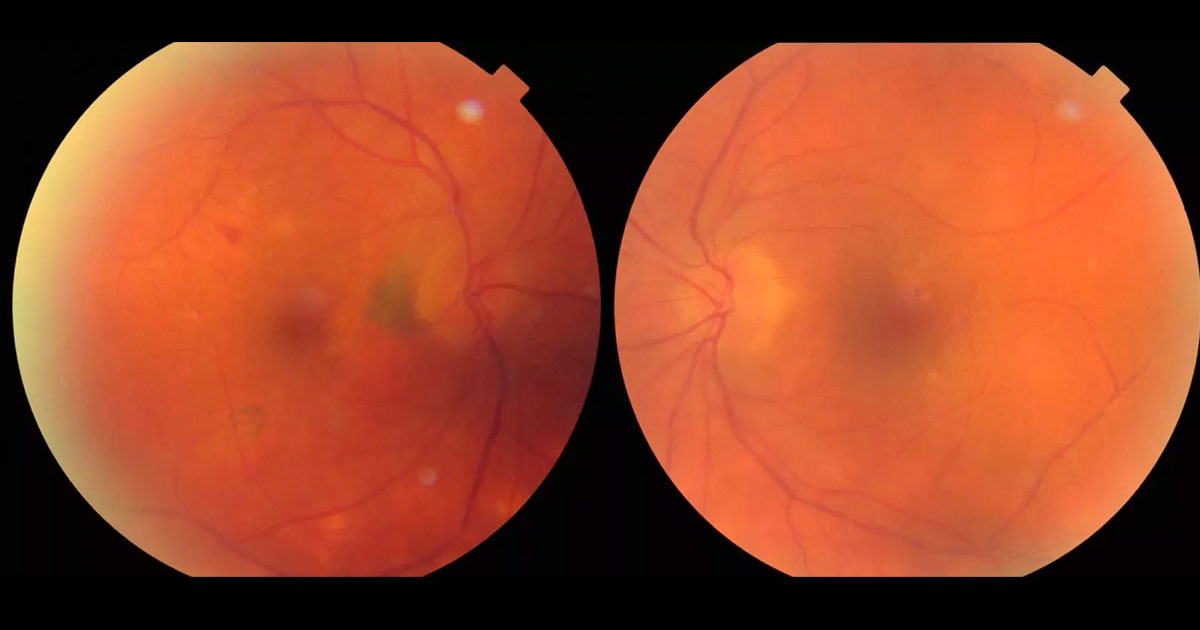 Figure 1. Colour fundus photographs show peripapillary and inferotemporal pigmentary changes in the right eye. There are some retinal pigment epithelial changes at the left macula and irregularity of the retinal vasculature.

A 66-year-old Caucasian lady was referred by her ophthalmologist for a second opinion regarding the cause of a right peri-papillary choroidal neovascular membrane.

A 66-year-old Caucasian lady presented to her local ophthalmologist complaining of a 2-month history of blurred right vision. She had been diagnosed with a right peri-papillary choroidal neovascular membrane (CNV) a year ago and treated with six intravitreal Bevacizumab injections. They were started at one monthly intervals and she was now being treated on a pro re nata (PRN, “as required”) basis. She was referred for a second opinion when the treating ophthalmologist noticed bilateral vitreous cells. The patient denied any other previous eye issues or operations. She was taking antihypertensive medication but denied smoking or a family history of ocular problems. She wore spectacles for reading.

Visual acuity was 6/18 (pinhole no improvement) in the right eye (OD) and 6/6 in the left eye (OS). Mild nuclear sclerotic cataracts were present in both eyes. There were no anterior chamber cells, flare, or posterior synechiae. Pupil reactions were normal. In both eyes was moderate vitritis, obscuring clear visualization of the fundus, as well as irregularities of the retinal vessels. The optic discs were full but had clear margins. Pigmentary changes were noted at the right peri-papillary region and inferotemporally. and at the left macula (Figure 1).

Optical coherence tomography showed a subretinal hyper reflective lesion close to the right optic disc with some subretinal and intraretinal fluid. The fovea was just spared. A few mild intraretinal cysts were detected near the left optic disc. Vitreous cells were present, greater in the right than the left eye (Figure 2). Fluorescein angiography confirmed bilateral vasculitis with irregularity of the retinal vessel calibre, disc leakage and choroidal neovascular membranes temporal to the right optic disc and inferotemporal to the fovea (Figure 3). Indocyanine green angiography revealed multiple hypofluorescent spots in both eyes (Figure 4). Blood was sent for full blood count, liver and renal function tests, TB Quantiferon, ACE, and Syphilis VDRL. These were found to be normal but HLA-29 was positive. A Chest X ray was normal. 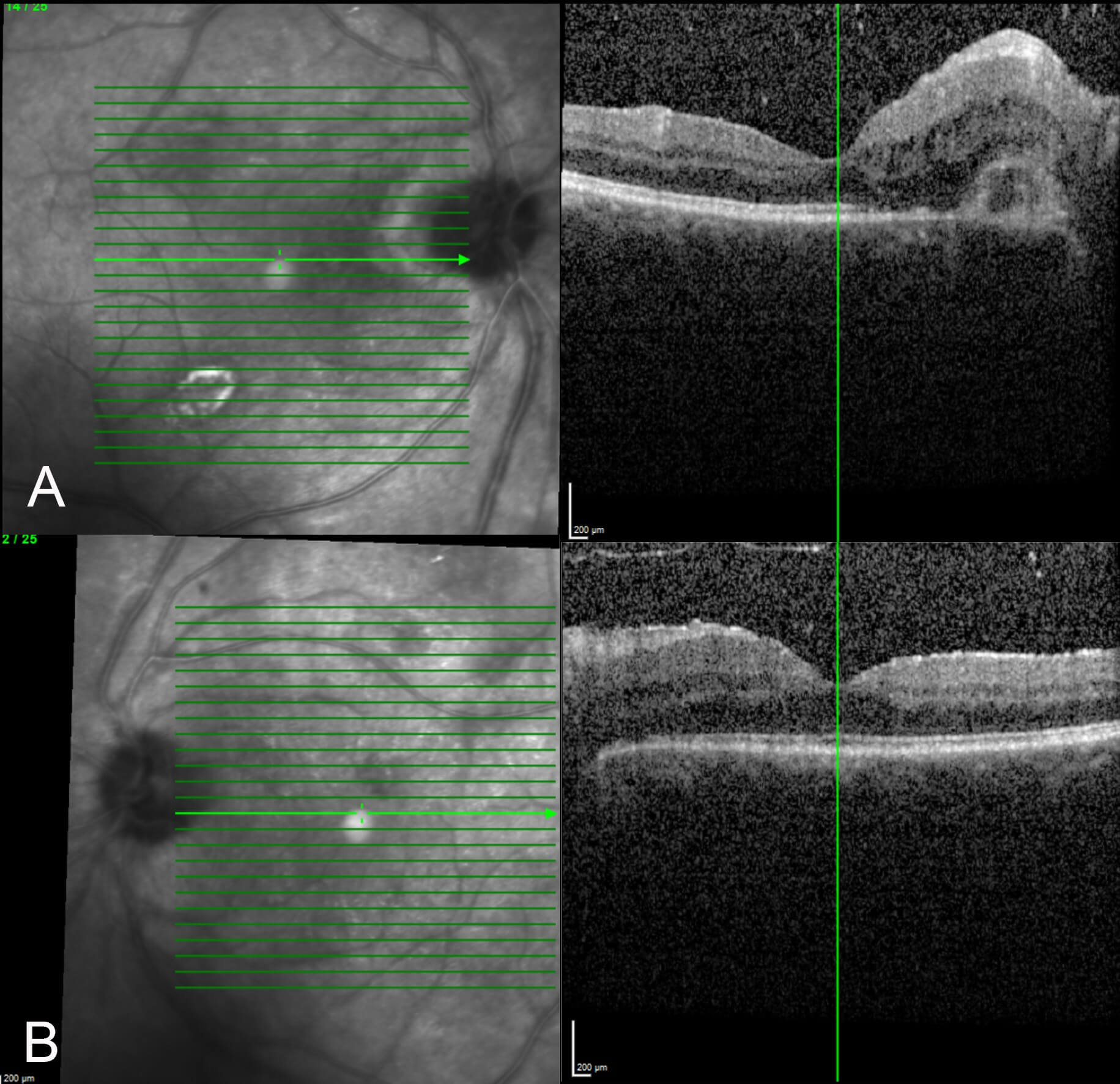 Figure 2. A) Optical coherence tomography through the right macula shows a subretinal hyper reflective lesion close to the optic disc with some subretinal and intraretinal fluid. The fovea is just spared. Vitreous cells are present. B) In the left eye there is some retinal thickening with a few intraretinal cystic changes close to the optic disc. Some vitreous cells are also present.

Figure 3. Fundus fluorescein angiography shows bilateral hyperfluorescent vasculitis with irregularity of the retinal vessel calibre, some disc leakage and choroidal neovascular membranes both temporal to the right optic disc and inferotemporal to the fovea.

Given the clinical findings, we commenced the patient on a course of oral steroids with introduction a steroid sparing agent early to control the inflammation. She was initially started on oral Prednisolone 60mg daily po (body weight 67kg), and is currently on a slow tapering course. Tacrolimus was introduced after trialing and failing Mycophenolate. The Tacrolimus level was monitored with serum trough levels and dose adjusted according to her clinical progression. The patient continued to receive right Bevacizumab injections on a PRN basis, and has not required many more injections since commencing systemic treatment for birdshot chorioretinopathy. Vitreous activity has decreased since commencing systemic treatment. Her right vision has improved to 6/9 at her last visit with no symptomatic floaters. She is currently under 3 monthly review.

Birdshot chorioretinopathy (“Birdshot”) is a chronic bilateral posterior uveitis that involves inflammation of the choroid and retinal vessels. Patients commonly present complaining of reduced vision and floaters, and fundus examination may reveal multiple hypopigmented lesions, clustered and radiating out from the optic discs. They may present early with vitritis and vasculitis,(1) and later in the disease with cystoid macular oedema (CMO), and retinal/choroidal atrophy. They are almost never seen with anterior chamber inflammation, keratic precipitates, or posterior synechiae.(2)

Birdshot is primarily associated with Caucasian females, aged between 40-60 years of age. It has a strong correlation with HLA A29, with 80-98% of patients being positive, versus 7% in the general population.(3)

As the disease progresses, Birdshot may present with CMO as the main cause of reduced vision (84% vs 30% in other forms of uveitis),1 RPE changes or atrophy, optic disc atrophy and inflammatory CNVs. Therefore, regular OCT scans, visual field tests, fundus photography, fundus autofluorescence, colour vision, FFAs and ICGs are important diagnostic and monitoring tests. Electrophysiology tests are also helpful in monitoring the disease progression.(4)

About 20% of Birdshot may achieve remission without treatment, but the majority of patients will require long term immunomodulation due to recurrent attacks. Oral or local steroids may be used for acute exacerbations, and chronic disease will often require long term immunosuppressants such as Mycophenolate, Cyclosporine, or Tacrolimus. These medications require regular blood tests to monitor for side effects. Although CNV is a rare complication of Birdshot (less than 6% of reported cases),(3) often combination treatment of anti-VEGF injections and systemic anti-inflammatories are required to prevent permanent visual loss.(5)