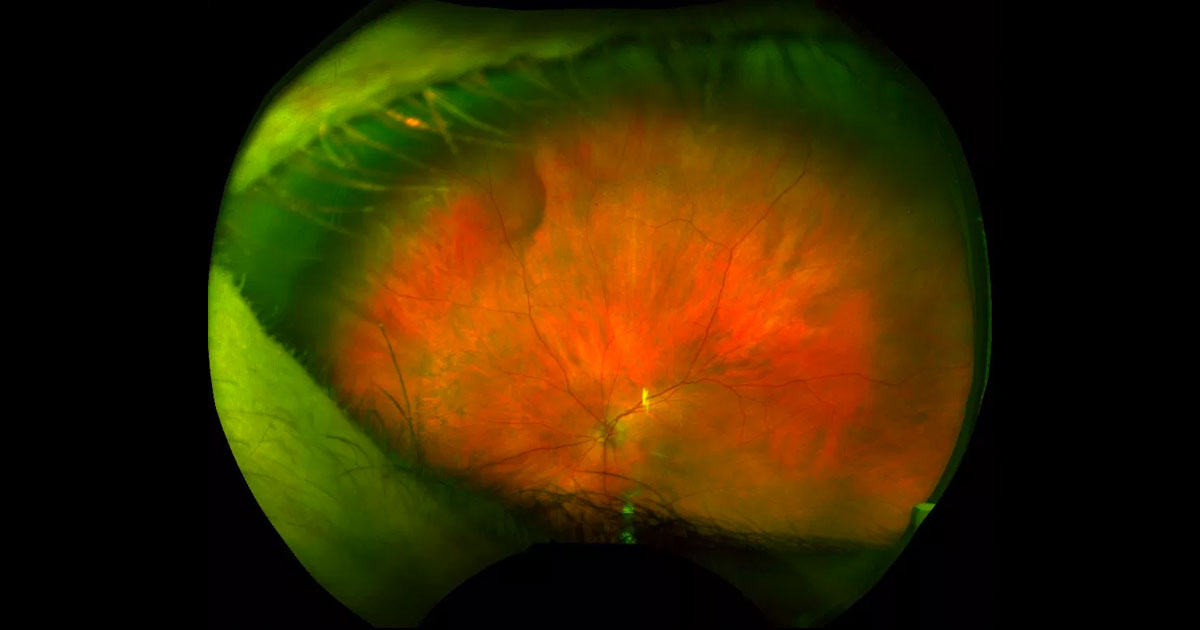 A 79-year-old woman was referred by her general ophthalmologist with left pseudophakic cystoid macular oedema and a raised peripheral sub retinal lesion.

A 79-year-old lady was referred by her general ophthalmologist for treatment of left pseudophakic cystoid macular oedema. She had been commenced on topical maxidex and acular drops qid for this. An incidental left superonasal raised subretinal lesion had been detected (Figure 1). Past medical history included hypertension, hypercholesterolaemia, hypothyroidism and essential tremor but there were no other systemic symptoms.

Visual acuities were 6/12+2 ph 6/7.5+1 in the right eye (OD) and 6/7.5-1 in the left eye (OS). Intraocular pressures were 10mmHg OD and 12mmHg OS. A moderate nuclear sclerotic cataract was present in the right eye and a well-placed intraocular lens in the left. The right macula was normal and there was resolving left pseudophakic cystoid macular oedema. Superonasally in the left eye was a bulbous, reddish-brown subretinal elevation. It did not have any associated subretinal fluid, haemorrhage, lipid, drusen or orange pigment.

The differential diagnosis for a peripheral subretinal mass includes:

Near-infrared imaging showed the lesion to be dark (Figure 2). Optical coherence tomography (OCT) through the lesion demonstrated a large hyporeflective space deep to the retinal pigment epithelium (RPE, Figure 3). When the globe was pressed on, the lesion was seen to disappear during indirect ophthalmoscopy.

Figure 2. Near-infrared imaging shows the lesion to be dark.

The patient was reassured that the lesion is benign. The pseudophakic cystoid macular oedema resolved with topical therapy and she was referred back to her ophthalmologist for ongoing care.

Vortex varices are most commonly unilateral, monofocal and located in the peripheral nasal quadrants. Occasional double vortex vein varices have been described. They occur most commonly in middle to late age, but have been described in children as young as 8 years.(2) The key to their diagnosis is the fact that they disappear when digital ocular pressure is applied, since the intraocular pressure exceeds the venous drainage pressure.(2) Although this manouvere makes the diagnosis of these benign lesions quite simple, vortex varices can be misdiagnosed as choroidal naevi, melanoma, metastases, haemangioma and subretinal haemorrhage. Occasionally they may be complicated by vascular occlusion.(3)

The cause of vortex varices remains unknown. Theories include gaze-evoked kinking of the vortex vein(1,4) compression on the scleral emissary canal, Valsalva manouveres or prone posture.(2)

In cases of diagnostic uncertainty such as posterior lesions5, multi-modal imaging may be of assistance. Enhanced-depth imaging optical coherence tomography (EDI-OCT) demonstrates a large hyporeflective cavity underneath the retinal pigment epithelium (RPE) which may be multi-lobulated.(2,4,6) The varix is dark on near-infrared imaging due to the higher absorption of near-infrared light by blood. Being deep to the retina and RPE, vortex varices are not visible on ultra-wide field (UWF) autofluorescence or fluorescein angiography. They are however fluorescent on UWF indocyanine green angiography, an appearance that disappears with digital ocular pressure.(2,4)