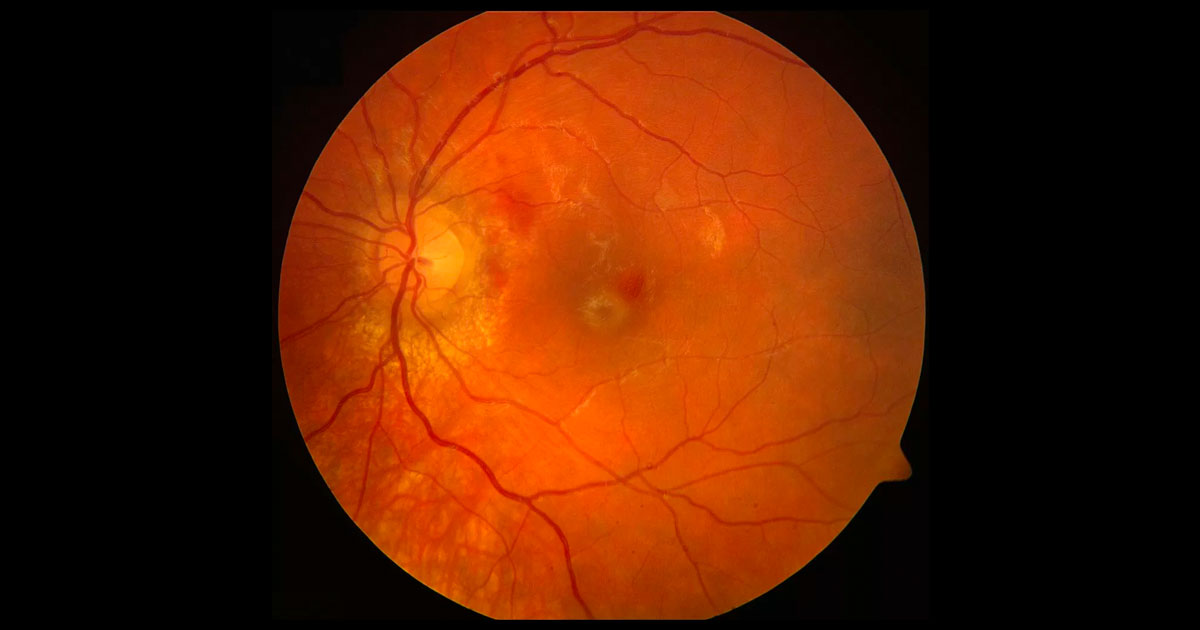 A 10-year-old boy presented with blurred left vision after being hit in the eye with a cricket bat. The patient was emmetropic. The patient’s medical, surgical, and family histories were unremarkable.

Visual acuities were 6/5 in the right eye (OD) and 6/120 (no improvement with pinhole) in the left eye (OS). Intraocular pressures were 8mmHg in each eye. The left pupil was mildly dilated. There was no contralateral (“reverse”) relative afferent pupil defect (i.e. no further constriction of the right pupil when light was shone in the right eye after the left), suggesting normal left optic nerve function.

External examination of the left eye revealed periorbital oedema and ecchymosis. Extraocular movements were within normal limits and there was no enophthalmos. Orbital fracture was excluded clinically. In the left eye there was a small iris rupture and a few red blood cells in the anterior chamber but no macro-hyphaema nor angle recession on gonioscopy.

Fundus examination revealed an abnormal foveal reflex and haemorrhages temporal to the optic disc (Figure 1). No peripheral retinal tear or dialysis was noted.

The differential diagnosis for an abnormal foveal reflex in the context of trauma includes:

Optical coherence tomography (OCT) through the left macula demonstrated a full thickness macula hole (FTMH) (Figure 2). Fluorescein angiography demonstrated a small area of mild hyperfluorescence in the temporal perifoveal area that did not increase in intensity or size over time. Peripapillary areas of hypofluorescence correlate to deep retinal haemorrhage with no evidence of choroidal rupture (Figure 3).

Figure 3. Fluorescein angiography demonstrated a small area of mild hyperfluorescence in the temporal perifoveal area that did not increase in intensity or size over time. Peripapillary areas of hypofluorescence correlate to deep retinal haemorrhages with no evidence of choroidal rupture.

After a discussion with the patient and his parents regarding the pros and cons of observation versus early surgical intervention, the decision was made for close observation. Serial OCTs were performed and at the 4-month follow-up visit, the patient’s vision and OCT remain unchanged. Anterior segment exam demonstrates a small residual iris rupture, a quiet anterior chamber and normal intra-ocular pressure.

Further observation continues and with the option of surgical treatment if the macular hole does not spontaneously close.

Some researchers believe that tangential forces may lead to development of traumatic holes, others postulate that traumatic forces cause accelerated traction at points of vitreous attachment leading to a traction hole formation.(1) A recent theory suggests macular oedema secondary to commotio retinae may play a role in hole formation, the authors argue that this may help explain the higher incidence of spontaneous closure of traumatic holes compared to idiopathic holes.(2)

Currently there is no consensus for the treatment of traumatic macular holes. Some clinicians advocate early surgical intervention with pars plana vitrectomy, internal limiting membrane peeling and gas tamponade. They state high success rates of anatomical closure following surgery and the potential for irreversible retinal degeneration the longer the hole is present.(1) Specific challenges of paediatric vitrectomy include cataractogenesis and the risk of iatrogenic retinal tears due to stronger adherence of the vitreoretinal interface.(3) Recent studies have shown promising results with the use of plasmin enzyme (ocriplasmin) assisted vitreous liquefaction in aiding paediatric traumatic macula hole surgery.(4)

However, a number of case series suggest observational management can be used in paediatric traumatic macular holes. Reported series show up to 40% of paediatric traumatic macular holes will close spontaneously without further intervention, thus sparing morbidity associated with surgical intervention.(5) The majority of spontaneous closure occurs between 1 week and 6 months, however some holes have taken 9 to 12 months for complete resolution.(2,5)

There is currently a National Institute of Health (NIH) registered multicenter clinical trial comparing six-month observation versus early surgical intervention in traumatic macular holes (NCT01509092). To date 44 patients have been recruited and the study is ongoing.(6)

Because of reports in the literature of spontaneous traumatic macular hole many clinicians have proposed observation for three to six months, followed by surgical intervention if closure does not occur in this time frame and if the potential for visual improvement exists. In young children, early surgical intervention may be indicated to prevent deprivation amblyopia. The result of the NIH registered trial may shed more light on this area.