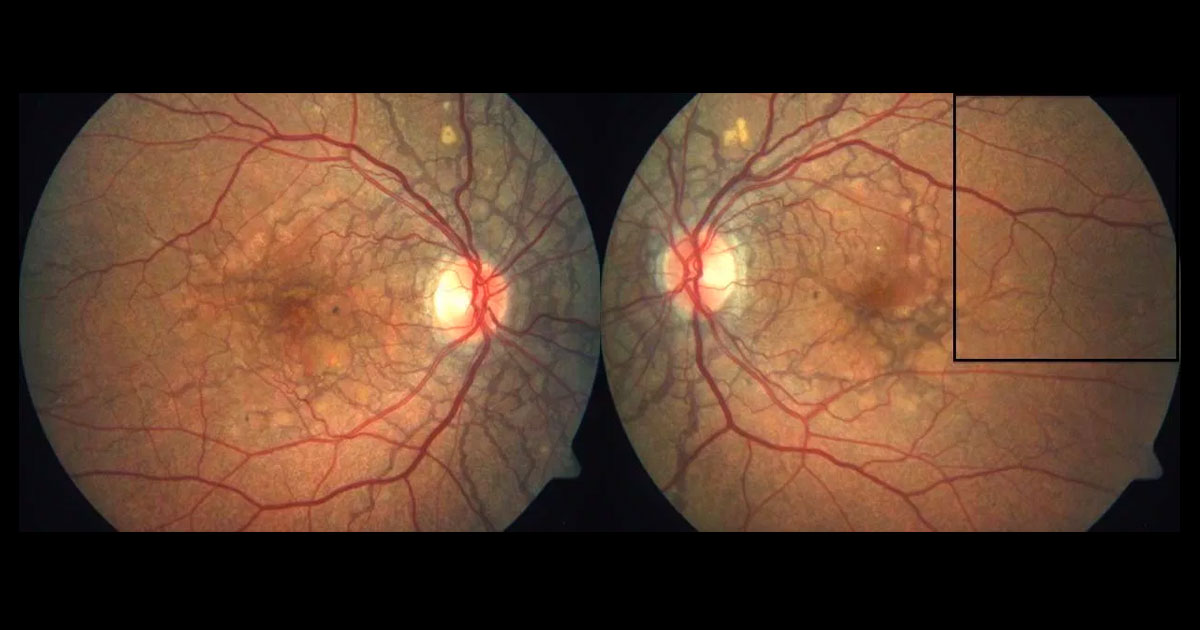 A 46-year-old Caucasian male saw his optometrist after noticing distortion in his left eye for two months. He was referred with bilateral fundus changes.

A 46-year-old Caucasian male saw his optometrist complaining of a 2-month history of distortion in his left eye. On dilated fundus photography, bilateral dark grey streaks were noted within the posterior poles. He was referred for further assessment.

There was no significant past ophthalmic or medical history. The patient’s brother was known to have an eye condition, but the diagnosis was unknown by the patient. No medications were being taken.

Visual acuity was 6/3.8 in the right eye and 6/9.5+2 (pinhole 6/6) in the left eye. Anterior segments were normal. On fundus examination, bilateral subretinal dark grey concentric and radial lines were noted particularly around the optic nerve heads and maculae (Figure 1). These were identified as angioid streaks. Temporal to both maculae there was a dimpled appearance to the retina, identified as “peau d’orange” (French, “orange peel skin”; Figure 1b).

The angioid streaks could be easily visualised on red free photography (Figure 3) and fundus autofluorescence (Figure 4). Buried optic disc drusen was not present on fundus autofluorescence. On optical coherence tomography (OCT) the streaks were seen as disruptions in Bruch’s membrane with elevations of the retinal pigment epithelium (Figure 5).

Figure 4. Fundus autofluorescence shows the angioid streaks as being hypoautofluorescent. In this patient there is no optic disc hyperautofluorescence, which can indicate the prescence of buried disc drusen.

Figure 5. Optical coherence tomography shows the angioid streaks as disruptions in Bruch’s membrane with elevations of the retinal pigment epithelium.

Involvement of the left fovea with an angioid streak was noted on OCT. However, there was no associated haemorrhage, lipid or subretinal or intraretinal fluid suggestive of a choroidal neovascularisation (CNV). The distortion was ascribed to the angioid streak alone and no fluorescein angiography was necessary. The patient was advised to avoid activities that could potentially lead to ocular trauma and to wear safety goggles if playing contact sports. An Amsler grid was provided to monitor for distortion suggestive of CNV. Referrals were made via the patient’s general practitioner to a dermatologist, gastroenterologist and cardiologist to screen for systemic complications associated with pseudoxanthoma elasticum.

Angioid streaks represent calcification and dehiscences of Bruch’s membrane (lying below the retinal pigment epithelium).(1-3) Through these streaks, CNV can grow. This occurs in 76-82% of eyes with angioid streaks, and is bilateral in over 70% of cases.(4) The development of CNV (Figure 6) tends to occur at a younger age than for neovascular age-related macular degeneration and is associated with a thinner than normal choroid.(4) All types of CNV can occur(2) and treatment with intravitreal anti-VEGF agents has been shown to be useful(1,5).

Figure 6. Fundus photograph of the left eye in a patient with angioid streaks secondary to pseudoxanthoma elasticum shows a submacular haemorrhage due to choroidal neovascularisation. This is one of the more common causes for vision in loss in patients with angioid streaks.

The aetiology of angioid streaks is diverse, but can be easily remembered by the pnemonic “PEPSI”:

Pseudoxanthoma elasticum (PXE OMIM# 264800) is the most common systemic association of angioid streaks, with a reported incidence of 59-87%.(2) It is an autosomal recessive disorder caused by mutations in the ABCC6 gene with an estimated prevalence of 1 in 50000.(6) In PXE, elastic fibres undergo calcification and fragmentation. Skin biopsies showing such changes in the dermal layers can assist with confirming the diagnosis.(7) Organ involvement includes the eyes, skin, cardiovascular and gastrointestinal systems. The combination of eye and skin changes has previously been named Grönbland-Strandburg syndrome.(2) Common manifestations are outlined below:(1,3,4,6,8,9)

Eyes
Skin
Cardiovascular
Gastrointestinal
Fundus autofluorescence of patients with pseudoxanthoma elasticum is useful in highlighting the streaks and geographic atrophy (both hypoautofluorescent) as well as any buried optic disc drusen (hyperautofluorescent, Figure 7).3

Patients with PXE lose vision due to involvement of the fovea by a streak, CNV or geographic atrophy.(2,9) Minor trauma can cause choroidal rupture in patients with PXE and protective goggles are therefore recommended in patients playing contact sports. Systemic involvement may require referral to a physician. Although currently there is no treatment for the underlying ocular or systemic manifestations of PXE, gene therapy may offer the potential of a cure in the future.